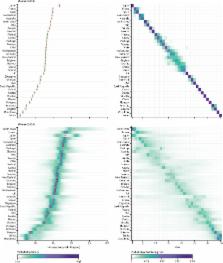 We developed an ensemble of 21 forecasting models, all of which probabilistically contributed towards the final projections. We applied this approach to project age-specific mortality to 2030 in 35 industrialised countries with high-quality vital statistics data. We used age-specific death rates to calculate life expectancy at birth and at age 65 years, and probability of dying before age 70 years, with life table methods.

There is more than a 50% probability that by 2030, national female life expectancy will break the 90 year barrier, a level that was deemed unattainable by some at the turn of the 21st century. Our projections show continued increases in longevity, and the need for careful planning for health and social services and pensions.

Global, regional, and national levels and trends in under-5 mortality between 1990 and 2015, with scenario-based projections to 2030: a systematic analysis by the UN Inter-agency Group for Child Mortality Estimation.

Danzhen You, Lucia Hug, Simon Ejdemyr … (2015)
In 2000, world leaders agreed on the Millennium Development Goals (MDGs). MDG 4 called for a two-thirds reduction in the under-5 mortality rate between 1990 and 2015. We aimed to estimate levels and trends in under-5 mortality for 195 countries from 1990 to 2015 to assess MDG 4 achievement and then intended to project how various post-2015 targets and observed rates of change will affect the burden of under-5 deaths from 2016 to 2030.

What has made the population of Japan healthy?

Shunya Ikeda, Mitsuhiko Noda, Manami Inoue … (2011)
People in Japan have the longest life expectancy at birth in the world. Here, we compile the best available evidence about population health in Japan to investigate what has made the Japanese people healthy in the past 50 years. The Japanese population achieved longevity in a fairly short time through a rapid reduction in mortality rates for communicable diseases from the 1950s to the early 1960s, followed by a large reduction in stroke mortality rates. Japan had moderate mortality rates for non-communicable diseases, with the exception of stroke, in the 1950s. The improvement in population health continued after the mid-1960s through the implementation of primary and secondary preventive community public health measures for adult mortality from non-communicable diseases and an increased use of advanced medical technologies through the universal insurance scheme. Reduction in health inequalities with improved average population health was partly attributable to equal educational opportunities and financial access to care. With the achievement of success during the health transition since World War 2, Japan now needs to tackle major health challenges that are emanating from a rapidly ageing population, causes that are not amenable to health technologies, and the effects of increasing social disparities to sustain the improvement in population health. Copyright © 2011 Elsevier Ltd. All rights reserved.