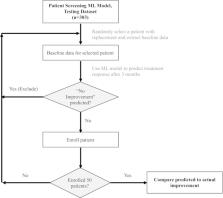 Clinical trial efficiency, defined as facilitating patient enrollment, and reducing the time to reach safety and efficacy decision points, is a critical driving factor for making improvements in therapeutic development. The present work evaluated a machine learning (ML) approach to improve phase II or proof‐of‐concept trials designed to address unmet medical needs in treating schizophrenia. Diagnostic data from the Clinical Antipsychotic Trials of Intervention Effectiveness (CATIE) trial were used to develop a binary classification ML model predicting individual patient response as either “improvement,” defined as greater than 20% reduction in total Positive and Negative Syndrome Scale (PANSS) score, or “no improvement,” defined as an inadequate treatment response (<20% reduction in total PANSS). A random forest algorithm performed best relative to other tree‐based approaches in model ability to classify patients after 6 months of treatment. Although model ability to identify true positives, a measure of model sensitivity, was poor (<0.2), its specificity, true negative rate, was high (0.948). A second model, adapted from the first, was subsequently applied as a proof‐of‐concept for the ML approach to supplement trial enrollment by identifying patients not expected to improve based on their baseline diagnostic scores. In three virtual trials applying this screening approach, the percentage of patients predicted to improve ranged from 46% to 48%, consistently approximately double the CATIE response rate of 22%. These results show the promising application of ML to improve clinical trial efficiency and, as such, ML models merit further consideration and development.

The positive and negative syndrome scale (PANSS) for schizophrenia.

L Opler,  Jennifer Kay,  Paul Opler … (1986)
The variable results of positive-negative research with schizophrenics underscore the importance of well-characterized, standardized measurement techniques. We report on the development and initial standardization of the Positive and Negative Syndrome Scale (PANSS) for typological and dimensional assessment. Based on two established psychiatric rating systems, the 30-item PANSS was conceived as an operationalized, drug-sensitive instrument that provides balanced representation of positive and negative symptoms and gauges their relationship to one another and to global psychopathology. It thus constitutes four scales measuring positive and negative syndromes, their differential, and general severity of illness. Study of 101 schizophrenics found the four scales to be normally distributed and supported their reliability and stability. Positive and negative scores were inversely correlated once their common association with general psychopathology was extracted, suggesting that they represent mutually exclusive constructs. Review of five studies involving the PANSS provided evidence of its criterion-related validity with antecedent, genealogical, and concurrent measures, its predictive validity, its drug sensitivity, and its utility for both typological and dimensional assessment.

What does the PANSS mean?

Werner Kissling,  Johannes Hamann,  Eva Etschel … (2005)
Despite the frequent use of the Positive and Negative Syndrome Scale (PANSS) for rating the symptoms of schizophrenia, the clinical meaning of its total score and of the cut-offs that are used to define treatment response (e.g. at least 20% or 50% reduction of the baseline score) are as yet unclear. We therefore compared the PANSS with simultaneous ratings of Clinical Global Impressions (CGI). PANSS and CGI ratings at baseline (n = 4091), and after one, two, four and six weeks of treatment taken from a pooled database of seven pivotal, multi-center antipsychotic drug trials on olanzapine or amisulpride in patients with exacerbations of schizophrenia were compared using equipercentile linking. Being considered "mildly ill" according to the CGI approximately corresponded to a PANSS total score of 58, "moderately ill" to a PANSS of 75, "markedly ill" to a PANSS of 95 and severely ill to a PANSS of 116. To be "minimally improved" according to the CGI score was associated with a mean percentage PANSS reduction of 19%, 23%, 26% and 28% at weeks 1, 2, 4 and 6, respectively. The corresponding figures for a CGI rating "much improved" were 40%, 45%, 51% and 53%. The results provide a better framework for understanding the clinical meaning of the PANSS total score in drug trials of schizophrenia patients with acute exacerbations. Such studies may ideally use at least a 50% reduction from baseline cut-off to define response rather than lower thresholds. In treatment resistant populations, however, even a small improvement can be important, so that a 25% cut-off might be appropriate.