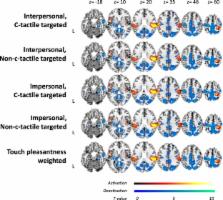 Kalina Christoff,  Zachary Irving,  Kieran C R Fox … (2016)
Most research on mind-wandering has characterized it as a mental state with contents that are task unrelated or stimulus independent. However, the dynamics of mind-wandering - how mental states change over time - have remained largely neglected. Here, we introduce a dynamic framework for understanding mind-wandering and its relationship to the recruitment of large-scale brain networks. We propose that mind-wandering is best understood as a member of a family of spontaneous-thought phenomena that also includes creative thought and dreaming. This dynamic framework can shed new light on mental disorders that are marked by alterations in spontaneous thought, including depression, anxiety and attention deficit hyperactivity disorder.

Default-mode activity during a passive sensory task: uncoupled from deactivation but impacting activation.

Michael D. Greicius,  Vinod Menon (2004)
Deactivation refers to increased neural activity during low-demand tasks or rest compared with high-demand tasks. Several groups have reported that a particular set of brain regions, including the posterior cingulate cortex and the medial prefrontal cortex, among others, is consistently deactivated. Taken together, these typically deactivated brain regions appear to constitute a default-mode network of brain activity that predominates in the absence of a demanding external task. Examining a passive, block-design sensory task with a standard deactivation analysis (rest epochs vs. stimulus epochs), we demonstrate that the default-mode network is undetectable in one run and only partially detectable in a second run. Using independent component analysis, however, we were able to detect the full default-mode network in both runs and to demonstrate that, in the majority of subjects, it persisted across both rest and stimulus epochs, uncoupled from the task waveform, and so mostly undetectable as deactivation. We also replicate an earlier finding that the default-mode network includes the hippocampus suggesting that episodic memory is incorporated in default-mode cognitive processing. Furthermore, we show that the more a subject's default-mode activity was correlated with the rest epochs (and "deactivated" during stimulus epochs), the greater that subject's activation to the visual and auditory stimuli. We conclude that activity in the default-mode network may persist through both experimental and rest epochs if the experiment is not sufficiently challenging. Time-series analysis of default-mode activity provides a measure of the degree to which a task engages a subject and whether it is sufficient to interrupt the processes--presumably cognitive, internally generated, and involving episodic memory--mediated by the default-mode network.

The science of interpersonal touch: an overview.

Alberto Gallace,  Charles Spence (2010)
Surprisingly little scientific research has been conducted on the topic of interpersonal touch over the years, despite the importance of touch in our everyday social interactions from birth through to adulthood and old age. In this review, we critically evaluate the results of the research on this topic that have emerged from disciplines, such as cognitive and social psychology, neuroscience, and cultural anthropology. We highlight some of the most important advances to have been made in our understanding of this topic: For example, research has shown that interpersonal tactile stimulation provides an effective means of influencing people's social behaviors (such as modulating their tendency to comply with requests, in affecting people's attitudes toward specific services, in creating bonds between couples or groups, and in strengthening romantic relationships), regardless of whether or not the tactile contact itself can be remembered explicitly. What is more, interpersonal touch can be used to communicate emotion in a manner similar to that demonstrated previously in vision and audition. The recent growth of studies investigating the potential introduction of tactile sensations to long-distance communication technologies (by means of mediated or 'virtual' touch) are also reviewed briefly. Finally, we highlight the synergistic effort that will be needed by researchers in different disciplines if we are to develop a more complete understanding of interpersonal touch in the years to come.