The mismatch negativity: A review of underlying mechanisms 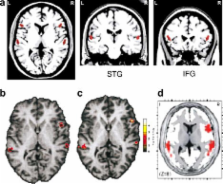 The mismatch negativity (MMN) is a brain response to violations of a rule, established by a sequence of sensory stimuli (typically in the auditory domain) [Näätänen R. Attention and brain function. Hillsdale, NJ: Lawrence Erlbaum; 1992]. The MMN reflects the brain’s ability to perform automatic comparisons between consecutive stimuli and provides an electrophysiological index of sensory learning and perceptual accuracy. Although the MMN has been studied extensively, the neurophysiological mechanisms underlying the MMN are not well understood. Several hypotheses have been put forward to explain the generation of the MMN; amongst these accounts, the “ adaptation hypothesis” and the “ model adjustment hypothesis” have received the most attention. This paper presents a review of studies that focus on neuronal mechanisms underlying the MMN generation, discusses the two major explanatory hypotheses, and proposes predictive coding as a general framework that attempts to unify both.

The mismatch negativity (MMN) in basic research of central auditory processing: a review.

K Alho,  Seppo T Rinne,  R Näätänen … (2007)
In the present article, the basic research using the mismatch negativity (MMN) and analogous results obtained by using the magnetoencephalography (MEG) and other brain-imaging technologies is reviewed. This response is elicited by any discriminable change in auditory stimulation but recent studies extended the notion of the MMN even to higher-order cognitive processes such as those involving grammar and semantic meaning. Moreover, MMN data also show the presence of automatic intelligent processes such as stimulus anticipation at the level of auditory cortex. In addition, the MMN enables one to establish the brain processes underlying the initiation of attention switch to, conscious perception of, sound change in an unattended stimulus stream.

Schizophrenia genes, gene expression, and neuropathology: on the matter of their convergence.

Ariel D. Weinberger,  P. Harrison (2004)
This review critically summarizes the neuropathology and genetics of schizophrenia, the relationship between them, and speculates on their functional convergence. The morphological correlates of schizophrenia are subtle, and range from a slight reduction in brain size to localized alterations in the morphology and molecular composition of specific neuronal, synaptic, and glial populations in the hippocampus, dorsolateral prefrontal cortex, and dorsal thalamus. These findings have fostered the view of schizophrenia as a disorder of connectivity and of the synapse. Although attractive, such concepts are vague, and differentiating primary events from epiphenomena has been difficult. A way forward is provided by the recent identification of several putative susceptibility genes (including neuregulin, dysbindin, COMT, DISC1, RGS4, GRM3, and G72). We discuss the evidence for these and other genes, along with what is known of their expression profiles and biological roles in brain and how these may be altered in schizophrenia. The evidence for several of the genes is now strong. However, for none, with the likely exception of COMT, has a causative allele or the mechanism by which it predisposes to schizophrenia been identified. Nevertheless, we speculate that the genes may all converge functionally upon schizophrenia risk via an influence upon synaptic plasticity and the development and stabilization of cortical microcircuitry. NMDA receptor-mediated glutamate transmission may be especially implicated, though there are also direct and indirect links to dopamine and GABA signalling. Hence, there is a correspondence between the putative roles of the genes at the molecular and synaptic levels and the existing understanding of the disorder at the neural systems level. Characterization of a core molecular pathway and a 'genetic cytoarchitecture' would be a profound advance in understanding schizophrenia, and may have equally significant therapeutic implications.

On the computational architecture of the neocortex. II. The role of cortico-cortical loops.

Andrew D Mumford (1991)
This paper is a sequel to an earlier paper which proposed an active role for the thalamus, integrating multiple hypotheses formed in the cortex via the thalamo-cortical loop. In this paper, I put forward a hypothesis on the role of the reciprocal, topographic pathways between two cortical areas, one often a 'higher' area dealing with more abstract information about the world, the other 'lower', dealing with more concrete data. The higher area attempts to fit its abstractions to the data it receives from lower areas by sending back to them from its deep pyramidal cells a template reconstruction best fitting the lower level view. The lower area attempts to reconcile the reconstruction of its view that it receives from higher areas with what it knows, sending back from its superficial pyramidal cells the features in its data which are not predicted by the higher area. The whole calculation is done with all areas working simultaneously, but with order imposed by synchronous activity in the various top-down, bottom-up loops. Evidence for this theory is reviewed and experimental tests are proposed. A third part of this paper will deal with extensions of these ideas to the frontal lobe.