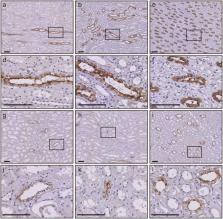 Aquaporin-2 (AQP2), a vasopressin-regulated water channel, plays an important role in renal water homeostasis. It has been reported that the level of AQP2 in human urine is altered during pregnancy. However, little is known about the level of urinary AQP2 in pregnant cattle. In this study, we examined the level of AQP2-bearing extracellular vesicles (uEV-AQP2), which account for most urinary AQP2, in both heifers and cows during the gestational and postpartum periods. The level of uEV-AQP2 was significantly decreased during gestation in comparison with the other cattle examined. Similarly, the levels of EV marker proteins in uEVs, including tumor susceptibility gene 101 (TSG101) protein and apoptosis-linked gene 2-interacting protein X (ALIX), were significantly decreased during gestation. There were significant correlations between the levels of uEV-AQP2 and uEV-TSG101, or uEV-ALIX. Immunohistochemistry data from pregnant and non-pregnant cattle supported the notion that the level of uEV-AQP2 was decreased during gestation. These data indicate that the level of uEV-AQP2 is decreased in pregnant cattle, possibly through a decrease in both the number of EVs released into the urine and renal AQP2 expression.

BoxPlotR: a web tool for generation of box plots.

Aquaporins in the kidney: from molecules to medicine.

Kee Kwon,  Søren Nielsen,  D Marples … (2001)
The discovery of aquaporin-1 (AQP1) answered the long-standing biophysical question of how water specifically crosses biological membranes. In the kidney, at least seven aquaporins are expressed at distinct sites. AQP1 is extremely abundant in the proximal tubule and descending thin limb and is essential for urinary concentration. AQP2 is exclusively expressed in the principal cells of the connecting tubule and collecting duct and is the predominant vasopressin-regulated water channel. AQP3 and AQP4 are both present in the basolateral plasma membrane of collecting duct principal cells and represent exit pathways for water reabsorbed apically via AQP2. Studies in patients and transgenic mice have demonstrated that both AQP2 and AQP3 are essential for urinary concentration. Three additional aquaporins are present in the kidney. AQP6 is present in intracellular vesicles in collecting duct intercalated cells, and AQP8 is present intracellularly at low abundance in proximal tubules and collecting duct principal cells, but the physiological function of these two channels remains undefined. AQP7 is abundant in the brush border of proximal tubule cells and is likely to be involved in proximal tubule water reabsorption. Body water balance is tightly regulated by vasopressin, and multiple studies now have underscored the essential roles of AQP2 in this. Vasopressin regulates acutely the water permeability of the kidney collecting duct by trafficking of AQP2 from intracellular vesicles to the apical plasma membrane. The long-term adaptational changes in body water balance are controlled in part by regulated changes in AQP2 and AQP3 expression levels. Lack of functional AQP2 is seen in primary forms of diabetes insipidus, and reduced expression and targeting are seen in several diseases associated with urinary concentrating defects such as acquired nephrogenic diabetes insipidus, postobstructive polyuria, as well as acute and chronic renal failure. In contrast, in conditions with water retention such as severe congestive heart failure, pregnancy, and syndrome of inappropriate antidiuretic hormone secretion, both AQP2 expression levels and apical plasma membrane targetting are increased, suggesting a role for AQP2 in the development of water retention. Continued analysis of the aquaporins is providing detailed molecular insight into the fundamental physiology and pathophysiology of water balance and water balance disorders.

This is an open-access article distributed under the terms of the Creative Commons Attribution Non-Commercial No Derivatives (by-nc-nd) License. (CC-BY-NC-ND 4.0: https://creativecommons.org/licenses/by-nc-nd/4.0/)