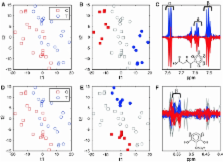 Metabolomics data obtained from (human) nutritional intervention studies can have a rather complex structure that depends on the underlying experimental design. In this paper we discuss the complex structure in data caused by a cross-over designed experiment. In such a design, each subject in the study population acts as his or her own control and makes the data paired. For a single univariate response a paired t-test or repeated measures ANOVA can be used to test the differences between the paired observations. The same principle holds for multivariate data. In the current paper we compare a method that exploits the paired data structure in cross-over multivariate data (multilevel PLSDA) with a method that is often used by default but that ignores the paired structure (OPLSDA). The results from both methods have been evaluated in a small simulated example as well as in a genuine data set from a cross-over designed nutritional metabolomics study. It is shown that exploiting the paired data structure underlying the cross-over design considerably improves the power and the interpretability of the multivariate solution. Furthermore, the multilevel approach provides complementary information about (I) the diversity and abundance of the treatment effects within the different (subsets of) subjects across the study population, and (II) the intrinsic differences between these study subjects.

Richard Draijer,  Marc Jacobs,  C Kroner … (2008)
A new method is introduced for the analysis of 'omics' data derived from crossover designed drug or nutritional intervention studies. The method aims at finding systematic variations in metabolic profiles after a drug or nutritional challenge and takes advantage of the crossover design in the data. The method, which can be considered as a multivariate extension of a paired t test, generates different multivariate submodels for the between- and the within-subject variation in the data. A major advantage of this variation splitting is that each submodel can be analyzed separately without being confounded with the other variation sources. The power of the multilevel approach is demonstrated in a human nutritional intervention study which used NMR-based metabolomics to assess the metabolic impact of grape/wine extract consumption. The variations in the urine metabolic profiles are studied between and within the human subjects using the multilevel analysis. After variation splitting, multilevel PCA is used to investigate the experimental and biological differences between the subjects, whereas a multilevel PLS-DA model is used to reveal the net treatment effect within the subjects. The observed treatment effect is validated with cross model validation and permutations. It is shown that the statistical significance of the multilevel classification model ( p < 0.0002) is a major improvement compared to a ordinary PLS-DA model ( p = 0.058) without variation splitting. Finally, rank products are used to determine which NMR signals are most important in the multilevel classification model.