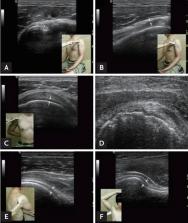 A total of 251 healthy adults were recruited for this study. Ultrasonography was performed by experienced rheumatologists who had undergone four appropriate training programs in Korea. A General Electric LOGIQ electronic ultrasound device fitted with a 12 MHz linear transducer was employed. Mean values ± standard deviations (SDs) were defined as standard reference values. Intraclass correlation coefficients was employed to evaluate the extent of inter- and intraobserver agreement when MSUS measurements were made.

We defined standard reference values for MSUS in healthy Korean adults. The reliabilities of interobserver agreements were high after appropriate training program.

Guidelines for musculoskeletal ultrasound in rheumatology.

Ekkehart Schmidt,  Meic H. Schmidt,  Kate E Ihle … (2004)
To determine standard reference values for musculoskeletal ultrasonography in healthy adults. Ultrasonography was performed on 204 shoulders, elbows, hands, hips, knees, and feet of 102 healthy volunteers (mean age 38.4 years; range 20-60; 54 women) with a linear probe (10-5 MHz; Esaote Technos MP). Diameters of tendons, bursae, cartilage, erosions, hypoechoic rims around tendons and at joints were measured with regard to established standard scans. Mean, minimum, and maximum values, as well as two standard deviations (2 SD) were determined. Mean values +/-2 SD were defined as standard reference values. Hypoechoic rims were normally present in joints and tendon sheaths owing to physiological synovial fluid and/or cartilage. Similarly, fluid was found in the subdeltoid bursa in 173/204 (85%), at the long biceps tendon in 56 (27%), in the suprapatellar recess in 158 (77%), in the popliteal bursae in 32 (16%), and in the retrocalcaneal bursa in 49 (24%). Erosions of >1 mm were seen at the humeral head in 47 (23%). Values for important intervals were determined. The correlation between two investigators was 0.96 (0.78-0.99). The reliability of follow up investigations was 0.83 (0.52-0.99). Fluid in bursae as well as hypoechoic rims within joints and around tendons are common findings in healthy people. This study defines standard reference values for musculoskeletal ultrasonography to prevent misinterpretation of normal fluid as an anatomical abnormality.