What value is the CINAHL database when searching for systematic reviews of qualitative studies? 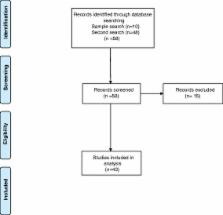 We carried out a retrospective analysis of a sample of systematic reviews of qualitative studies to investigate CINAHL’s potential contribution to identifying the evidence. In particular, we planned to identify the percentage of included studies available in CINAHL and the percentage of the included studies unique to the CINAHL database. After screening 58 qualitative systematic reviews identified from the Database of Abstracts of Reviews of Effects (DARE), we created a sample set of 43 reviews covering a range of topics including patient experience of both illnesses and interventions.

For all 43 reviews (21 %) in our sample, we found that some of the included studies were available in CINAHL. For nine of these reviews, all the studies that had been included in the final synthesis were available in the CINAHL database, so it could have been possible to identify all the included studies using just this one database, while for an additional 21 reviews (49 %), 80 % or more of the included studies were available in CINAHL. Consequently, for a total of 30 reviews, or 70 % of our sample, 80 % or more of the studies could be identified using CINAHL alone. 11 reviews, where we were able to recheck all the databases used by the original review authors, had included a study that was uniquely identified from the CINAHL database. The median number of unique studies was 9.09; while the range had a lowest value of 5.0 to the highest value of 33.0.

Assuming a rigorous search strategy was used and the records sought were accurately indexed, we could expect CINAHL to be a good source of primary studies for qualitative evidence syntheses. While we found some indication that CINAHL had the potential to provide unique studies for systematic reviews, we could only fully test this on a limited number of reviews, so we are less confident about this finding.

Alice Malpass,  Alison Shaw,  Debbie Sharp … (2009)
The UK National Institute for Clinical Excellence (NICE) Clinical Guidelines recommend routine prescription of antidepressants for moderate to severe depression. While many patients accept a prescription, one in three do not complete treatment. We carried out a meta-ethnography of published qualitative papers since 1990 whose focus is patients' experience of antidepressant use for depression, in order to understand barriers and facilitators to concordance and inform a larger qualitative study investigating antidepressant use over time. A systematic search of five databases was carried out, supported by hand searches of key journals, writing to first authors and examining reference lists. After piloting three critical appraisal tools, a modified version of the CASP (Critical Appraisal Skills Programme) checklist was used to appraise potentially relevant and qualitative papers. We carried out a synthesis using techniques of meta-ethnography involving translation and re-interpretation. Sixteen papers were included in the meta-ethnography. The papers fall into two related groups: (1) Papers whose focus is the decision-making relationship and the ways patients manage their use of antidepressants, and (2) Papers whose focus is antidepressants' effect on self-concept, ideas of stigma and its management. We found that patients' experience of antidepressants is characterised by the decision-making process and the meaning-making process, conceptualised here as the 'medication career' and 'moral career'. Our synthesis indicates ways in which general practitioners (GPs) can facilitate concordant relationships with patients regarding antidepressant use. First, GPs can enhance the potential for shared decision-making by reviewing patients' changing preferences for involvement in decision-making regularly throughout the patient's 'medication career'. Second, if GPs familiarise themselves with the competing demands that patients may experience at each decision-making juncture, they will be better placed to explore their patients' preferences and concerns--i.e. their 'moral career' of medication use. This may lead to valuable discussion of what taking antidepressants means for patients' sense of self and how their treatment decisions may be influenced by a felt sense of stigma.

Iain Marshall,  Charles Wolfe,  Christopher McKevitt (2012)
Objective To synthesise the findings from individual qualitative studies on patients’ understanding and experiences of hypertension and drug taking; to investigate whether views differ internationally by culture or ethnic group and whether the research could inform interventions to improve adherence. Design Systematic review and narrative synthesis of qualitative research using the 2006 UK Economic and Social Research Council research methods programme guidance. Data sources Medline, Embase, the British Nursing Index, Social Policy and Practice, and PsycInfo from inception to October 2011. Study selection Qualitative interviews or focus groups among people with uncomplicated hypertension (studies principally in people with diabetes, established cardiovascular disease, or pregnancy related hypertension were excluded). Results 59 papers reporting on 53 qualitative studies were included in the synthesis. These studies came from 16 countries (United States, United Kingdom, Brazil, Sweden, Canada, New Zealand, Denmark, Finland, Ghana, Iran, Israel, Netherlands, South Korea, Spain, Tanzania, and Thailand). A large proportion of participants thought hypertension was principally caused by stress and produced symptoms, particularly headache, dizziness, and sweating. Participants widely intentionally reduced or stopped treatment without consulting their doctor. Participants commonly perceived that their blood pressure improved when symptoms abated or when they were not stressed, and that treatment was not needed at these times. Participants disliked treatment and its side effects and feared addiction. These findings were consistent across countries and ethnic groups. Participants also reported various external factors that prevented adherence, including being unable to find time to take the drugs or to see the doctor; having insufficient money to pay for treatment; the cost of appointments and healthy food; a lack of health insurance; and forgetfulness. Conclusions Non-adherence to hypertension treatment often resulted from patients’ understanding of the causes and effects of hypertension; particularly relying on the presence of stress or symptoms to determine if blood pressure was raised. These beliefs were remarkably similar across ethnic and geographical groups; calls for culturally specific education for individual ethnic groups may therefore not be justified. To improve adherence, clinicians and educational interventions must better understand and engage with patients’ ideas about causality, experiences of symptoms, and concerns about drug side effects.

Women's perceptions and experiences of breastfeeding support: a metasynthesis.

Virginia Schmied,  Sarah Beake,  Athena Sheehan … (2011)
Both peer and professional support have been identified as important to the success of breastfeeding. The aim of this metasynthesis was to examine women's perceptions and experiences of breastfeeding support, either professional or peer, to illuminate the components of support that they deemed "supportive." The metasynthesis included studies of both formal or "created" peer and professional support for breastfeeding women but excluded studies of family or informal support. Qualitative studies were included as well as large-scale surveys if they reported the analysis of qualitative data gathered through open-ended responses. Primiparas and multiparas who initiated breastfeeding were included. Studies published in English, in peer-reviewed journals, and undertaken between January 1990 and December 2007 were included. After assessment for relevance and quality, 31 studies were included. Meta-ethnographic methods were used to identify categories and themes. The metasynthesis resulted in four categories comprising 20 themes. The synthesis indicated that support for breastfeeding occurred along a continuum from authentic presence at one end, perceived as effective support, to disconnected encounters at the other, perceived as ineffective or even discouraging and counterproductive. A facilitative approach versus a reductionist approach was identified as contrasting styles of support that women experienced as helpful or unhelpful. The findings emphasize the importance of person-centered communication skills and of relationships in supporting a woman to breastfeed. Organizational systems and services that facilitate continuity of caregiver, for example continuity of midwifery care or peer support models, are more likely to facilitate an authentic presence, involving supportive care and a trusting relationship with professionals. © 2010, Copyright the Authors. Journal compilation © 2010, Wiley Periodicals, Inc.