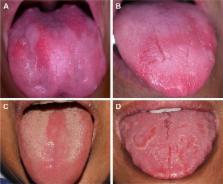 Vitamin B12 deficiency, which may cause serious neuropsychiatric damage, is common in the elderly. The non-specific clinical features of B12 deficiency and unreliable serum parameters make diagnosis difficult. We aimed to evaluate the value of oral “beefy red” patches as a clinical marker of B12 deficiency.

A diagnostic study was conducted in patients complaining of oral soreness, burning sensation, or severe recurrent oral ulcers. Patients underwent clinical examination and laboratory investigations, including complete blood count and estimation of serum B12, folate, iron, and ferritin levels. Resolution of clinical signs and symptoms after 1 month of B12 supplement was regarded as the diagnostic gold standard.

The combination of oral “beefy red” patch and serum cobalamin level <350 pg/mL appears to be useful for diagnosis of B12 deficiency.

Adrian Allen,  S Stabler,  Daniel Savage … (1994)
Patients with cobalamin (vitamin B12) deficiency usually lack many of the classic features of severe megaloblastic anemia; because of the low diagnostic specificity of decreased serum cobalamin levels, demonstrating the deficiency unequivocally is often difficult. We examined the sensitivity of measuring serum concentrations of methylmalonic acid and total homocysteine for diagnosing patients with clear-cut cobalamin deficiency and compared the results with those of patients with clear-cut folate deficiency. Serum metabolites were measured for all patients seen from 1982 to 1989 at two university hospitals who met the criteria for cobalamin and folate deficiency states and for such patients seen from 1968 to 1981 from whom stored sera were available. In all, 406 patients had 434 episodes of cobalamin deficiency and 119 patients had 123 episodes of folate deficiency. Criteria for deficiency states included serum vitamin levels, hematologic and neurologic findings, and responses to therapy. Responses were documented in 97% of cobalamin-deficient patients and 76% of folate-deficient patients. Metabolite levels were measured by modified techniques using capillary-gas chromatography and mass spectrometry. Most of the cobalamin-deficient patients had underlying pernicious anemia; two thirds were blacks or Latinos. Hematocrits were normal in 28% and mean cell volumes in 17%. Of the 434 episodes of cobalamin deficiency, 98.4% of serum methylmalonic acid levels and 95.9% of serum homocysteine levels were elevated (greater than 3 standard deviations above the mean in normal subjects). Only one patient had normal levels of both metabolites. Serum homocysteine levels were increased in 91% of the 123 episodes of folate deficiency. Methylmalonic acid was elevated in 12.2% of the folate-deficient patients; in all but one, the elevation was attributable to renal insufficiency or hypovolemia. For the cobalamin-deficient patients, measuring serum metabolite concentrations proved to be a highly sensitive test of deficiency. We conclude that normal levels of both methylmalonic acid and total homocysteine rule out clinically significant cobalamin deficiency with virtual certainty.

Megaloblastic anemia and other causes of macrocytosis.