Reference compounds for alternative test methods to indicate developmental neurotoxicity (DNT) potential of chemicals: example lists and criteria for their selection and use 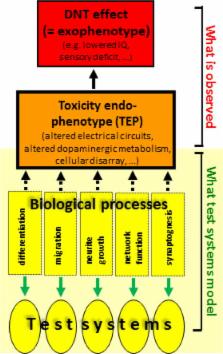 There is a paucity of information concerning the developmental neurotoxicity (DNT) hazard posed by industrial and environmental chemicals. New testing approaches will most likely be based on batteries of alternative and complementary (non-animal) tests. As DNT is assumed to result from the modulation of fundamental neurodevelopmental processes (such as neuronal differentiation, precursor cell migration or neuronal network formation) by chemicals, the first generation of alternative DNT tests target these processes. The advantage of such types of assays is that they capture toxicants with multiple targets and modes-of-action. Moreover, the processes modelled by the assays can be linked to toxicity endophenotypes, i.e. alterations in neural connectivity that form the basis for neurofunctional deficits in man. The authors of this review convened in a workshop to define criteria for the selection of positive/negative controls, to prepare recommendations on their use, and to initiate the setup of a directory of reference chemicals. For initial technical optimization of tests, a set of >50 endpoint-specific control compounds was identified. For further test development, an additional “test” set of 33 chemicals considered to act directly as bona fide DNT toxicants is proposed, and each chemical is annotated to the extent it fulfills these criteria. A tabular compilation of the original literature used to select the test set chemicals provides information on statistical procedures, and toxic/non-toxic doses (both for pups and dams). Suggestions are provided on how to use the >100 compounds (including negative controls) compiled here to address specificity, adversity and use of alternative test systems.

Jose Serrrano,  Matthew Bennett,  K Schmieder … (2010)
Ecological risk assessors face increasing demands to assess more chemicals, with greater speed and accuracy, and to do so using fewer resources and experimental animals. New approaches in biological and computational sciences may be able to generate mechanistic information that could help in meeting these challenges. However, to use mechanistic data to support chemical assessments, there is a need for effective translation of this information into endpoints meaningful to ecological risk-effects on survival, development, and reproduction in individual organisms and, by extension, impacts on populations. Here we discuss a framework designed for this purpose, the adverse outcome pathway (AOP). An AOP is a conceptual construct that portrays existing knowledge concerning the linkage between a direct molecular initiating event and an adverse outcome at a biological level of organization relevant to risk assessment. The practical utility of AOPs for ecological risk assessment of chemicals is illustrated using five case examples. The examples demonstrate how the AOP concept can focus toxicity testing in terms of species and endpoint selection, enhance across-chemical extrapolation, and support prediction of mixture effects. The examples also show how AOPs facilitate use of molecular or biochemical endpoints (sometimes referred to as biomarkers) for forecasting chemical impacts on individuals and populations. In the concluding sections of the paper, we discuss how AOPs can help to guide research that supports chemical risk assessments and advocate for the incorporation of this approach into a broader systems biology framework.

Philippe Grandjean,  Philip J. Landrigan (2014)
Neurodevelopmental disabilities, including autism, attention-deficit hyperactivity disorder, dyslexia, and other cognitive impairments, affect millions of children worldwide, and some diagnoses seem to be increasing in frequency. Industrial chemicals that injure the developing brain are among the known causes for this rise in prevalence. In 2006, we did a systematic review and identified five industrial chemicals as developmental neurotoxicants: lead, methylmercury, polychlorinated biphenyls, arsenic, and toluene. Since 2006, epidemiological studies have documented six additional developmental neurotoxicants-manganese, fluoride, chlorpyrifos, dichlorodiphenyltrichloroethane, tetrachloroethylene, and the polybrominated diphenyl ethers. We postulate that even more neurotoxicants remain undiscovered. To control the pandemic of developmental neurotoxicity, we propose a global prevention strategy. Untested chemicals should not be presumed to be safe to brain development, and chemicals in existing use and all new chemicals must therefore be tested for developmental neurotoxicity. To coordinate these efforts and to accelerate translation of science into prevention, we propose the urgent formation of a new international clearinghouse. Copyright © 2014 Elsevier Ltd. All rights reserved.

Tomasz Schneider,  Ryszard Przewłocki (2005)
Autism is a severe behavioral disorder characterized by pervasive impairments in social interactions, deficits in verbal and nonverbal communication, and stereotyped, repetitive patterns of behaviors and interests. Recently, a new rodent model of autism was created by exposure of rat fetuses to valproic acid (VPA) on the 12.5th day of gestation (VPA rats). The model has striking anatomical, pathological, and etiological similarities to human data; however, it has not been characterized behaviorally. In order to determine if VPA rats present behavioral aberrations observed in autism, their behavior was extensively evaluated in a battery of tests. The results of the present experiments demonstrate that VPA rats exhibit: (1) lower sensitivity to pain and higher sensitivity to nonpainful stimuli, (2) diminished acoustic prepulse inhibition, (3) locomotor and repetitive/stereotypic-like hyperactivity combined with lower exploratory activity, and (4) decreased number of social behaviors and increased latency to social behaviors. In addition, VPA rats showed delayed maturation, lower body weight, delayed motor development, and attenuated integration of a coordinated series of reflexes, delayed nest-seeking response mediated by olfactory system, and normal negative geotaxis. Interestingly, all behavioral aberrations described in this paper appear before puberty, which could distinguish the VPA rat model of autism from other animal models of neurodevelopmental disorders, especially rodent models of schizophrenia. Our results bring further support to validity of the proposed VPA animal model of autism, suggesting similarities between the observed pattern of behavioral alterations in VPA rats and features of disturbed behavior in autistic patients.

This is an Open Access article distributed under the terms of the Creative Commons Attribution 4.0 International license ( http://creativecommons.org/licenses/by/4.0/), which permits unrestricted use, distribution and reproduction in any medium, provided the original work is appropriately cited.