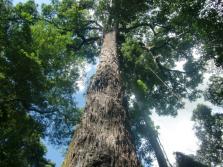 Amazon‐nut ( Bertholletia excelsa) is a hyperdominant and protected tree species, playing a keystone role in nutrient cycling and ecosystem service provision in Amazonia. Our main goal was to develop a robust habitat suitability model of Amazon‐nut and to identify the most important predictor variables to support conservation and tree planting decisions.

We collected 3,325 unique Amazon‐nut records and assembled >100 spatial predictor variables organized across climatic, edaphic, and geophysical categories. We compared suitability models using variables (a) selected through statistical techniques; (b) recommended by experts; and (c) integrating both approaches (a and b). We applied different spatial filtering scenarios to reduce overfitting. We additionally fine‐tuned MAXENT settings to our data. The best model was selected through quantitative and qualitative assessments.

Principal component analysis based on expert recommendations was the most appropriate method for predictor selection. Elevation, coarse soil fragments, clay, slope, and annual potential evapotranspiration were the most important predictors. Their relative contribution to the best model amounted to 75%. Filtering of the presences within a radius of 10 km displayed lowest overfitting, a satisfactory omission rate and the most symmetric distribution curve. Our findings suggest that under current environmental conditions, suitable habitat for Amazon‐nut is found across 2.3 million km 2, that is, 32% of the Amazon Biome.

Hyperdominance in the Amazonian tree flora.

Hans ter Steege,  Nigel Pitman,  Daniel Sabatier … (2013)
The vast extent of the Amazon Basin has historically restricted the study of its tree communities to the local and regional scales. Here, we provide empirical data on the commonness, rarity, and richness of lowland tree species across the entire Amazon Basin and Guiana Shield (Amazonia), collected in 1170 tree plots in all major forest types. Extrapolations suggest that Amazonia harbors roughly 16,000 tree species, of which just 227 (1.4%) account for half of all trees. Most of these are habitat specialists and only dominant in one or two regions of the basin. We discuss some implications of the finding that a small group of species--less diverse than the North American tree flora--accounts for half of the world's most diverse tree community.