Phase 1 randomized study on the safety, tolerability, and pharmacodynamic cognitive and electrophysiological effects of a dopamine D 1 receptor positive allosteric modulator in patients with schizophrenia 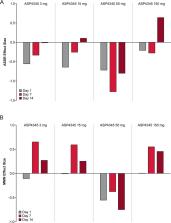 ASP4345, a novel dopamine D 1 receptor positive allosteric modulator, is being evaluated for the treatment of cognitive impairment associated with schizophrenia (CIAS). This phase 1 multiple ascending-dose study (NCT02720263) assessed the safety, tolerability, and pharmacodynamics of ASP4345 in patients with schizophrenia/schizoaffective disorder. Pharmacodynamic assessments were Cogstate cognitive tests and electrophysiological biomarkers, including gamma-band power and phase synchronization in response to 40-Hz auditory steady-state stimulation, as well as mismatch negativity (MMN) and P3a event-related potentials. The sample size determination was based on standard practice in assessing safety and tolerability of a new chemical entity. Data were summarized by conversion of this data into effect sizes using descriptive and inferential statistics. A total of 36 randomized patients received ASP4345 (3, 15, 50, and 150 mg; n = 9 each dose) and 12 patients received placebo. Patients in the ASP4345 group experienced 73 treatment-emergent adverse events (TEAEs) and 34 TEAEs were reported for the placebo group. The most common TEAEs were headache and somnolence and nearly all TEAEs were mild in severity. No changes in mood or self-reports of suicidal ideation/behavior were observed. Improvements in performance on cognitive tests were noted, which suggests a potential improvement in psychomotor function and visual attention. Furthermore, positive changes in neurophysiological biomarkers (auditory steady-state response [ASSR] and MMN) suggest improvement in information processing. The findings need to be confirmed in studies with a larger patient population. Nonetheless, the trends in safety and pharmacodynamic data support further clinical development of ASP4345 for the treatment of CIAS.

E O Rosvold,  P Rakic,  Fred Brozoski … (1979)
Depletion of dopamine in a circumscribed area of association cortex in rhesus monkeys produces an impairment in spatial delayed alternation performance nearly as severe as that caused by surgical ablation of the same area. This behavioral deficit can be pharmacologically reversed with dopamine agonists such as L-dopa and apomorphine. These data provide direct evidence that dopamine plays an important role in a specific cortical function.

P. J. Hsu,  S. Hsieh,  Neal R. Swerdlow … (2006)
Gamma band activity has been associated with many sensory and cognitive functions, and is important for cortico-cortical transmission and the integration of information across neural networks. The aims of the present study were to determine if schizophrenia patients have deficits in the generation and maintenance of coherent, synchronized oscillations in response to steady-state stimulation, and to examine the clinical and cognitive correlates of the electroencephalography (EEG) oscillatory dynamics. Schizophrenia patients (n = 100) and nonpsychiatric subjects (n = 80) underwent auditory steady-state event-related potential testing. Click trains varying in rate of stimulation (20, 30, and 40 Hz) were presented; EEG-evoked power and intertrial phase synchronization were obtained in response to each stimulation frequency. Subjects also underwent clinical and neurocognitive assessments. Patients had reductions in both evoked power and phase synchronization in response to 30- and 40-Hz stimulation but normal responsivity to 20-Hz stimulation. Maximal deficits were detected in response to 40-Hz stimulation. A modest association of reduced working memory performance and 40-Hz intertrial phase synchronization was present in schizophrenia patients (r = .32, p <.01). Schizophrenia patients have frequency-specific deficits in the generation and maintenance of coherent gamma-range oscillations, reflecting a fundamental degradation of basic integrated neural network activity.

S A Castner,  L J Siever,  Torgny Svensson … (2004)
Reinstatement of the function of working memory, the cardinal cognitive process essential for human reasoning and judgment, is potentially the most intractable problem for the treatment of schizophrenia. Since deficits in working memory are associated with dopamine dysregulation and altered D(1) receptor signaling within prefrontal cortex, we present the case for targeting novel drug therapies towards enhancing prefrontal D(1) stimulation for the amelioration of the debilitating cognitive deficits in schizophrenia. This review examines the role of dopamine in regulating cellular and circuit function within prefrontal cortex in order to understand the significance of the dopamine dysregulation found in schizophrenia and related non-human primate models. By revealing the associations among prefrontal neuronal function, dopamine and D(1) signaling, and cognition, we seek to pinpoint the mechanisms by which dopamine modulates working memory processes and how these mechanisms may be exploited to improve cognitive function. Dopamine deficiency within dorsolateral prefrontal cortex leads to abnormal recruitment of this region by cognitive tasks. Both preclinical and clinical studies have demonstrated a direct relationship between prefrontal dopamine function and the integrity of working memory, suggesting that insufficient D(1) receptor signaling in this region results in cognitive deficits. Moreover, working memory deficits can be ameliorated by treatments that augment D(1) receptor stimulation, indicating that this target presents a unique opportunity for the restoration of cognitive function in schizophrenia.