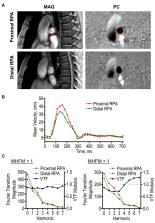 Omar A. Minai,  Ari Chaouat,  Serge Adnot (2010)
Pulmonary hypertension (PH) associated with parenchymal lung diseases is one of the most common forms of PH. Studies in patients with advanced COPD and hypoxemia have shown a very high prevalence of PH; however, prevalence in mild and moderate COPD is not known. Typical hemodynamic abnormalities include mild-to-moderate elevations in pulmonary artery pressure (PAP) and pulmonary vascular resistance with a preserved cardiac output. A small proportion ( 35-40 mm Hg) in the presence of mild airflow limitation and are believed to have disproportionate PH. COPD-associated PH has significant clinical implications because it can produce functional limitation and has a negative impact on prognosis. Doppler echocardiography is the best noninvasive test, but noninvasive methods used for diagnosis are prone to error and cannot be relied on when making or refuting the diagnosis of PH. All patients require right-sided heart catheterization if treatment with PH-specific medications is contemplated. The most important steps in managing these patients are: (1) confirm the diagnosis; (2) optimize COPD management; (3) rule out comorbidities; (4) assess and treat hypoxemia; and (5) enroll the patient in pulmonary rehabilitation, if indicated. In patients with PH and advanced airflow limitation, lung transplantation offers the best opportunity for long-term benefit. The role of PH-specific medications remains poorly defined and requires further study but may be considered in patients with disproportionate PH.