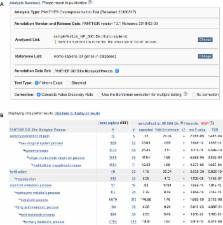 PANTHER (Protein Analysis Through Evolutionary Relationships, http://pantherdb.org) is a resource for the evolutionary and functional classification of genes from organisms across the tree of life. We report the improvements we have made to the resource during the past two years. For evolutionary classifications, we have added more prokaryotic and plant genomes to the phylogenetic gene trees, expanding the representation of gene evolution in these lineages. We have refined many protein family boundaries, and have aligned PANTHER with the MEROPS resource for protease and protease inhibitor families. For functional classifications, we have developed an entirely new PANTHER GO-slim, containing over four times as many Gene Ontology terms as our previous GO-slim, as well as curated associations of genes to these terms. Lastly, we have made substantial improvements to the enrichment analysis tools available on the PANTHER website: users can now analyze over 900 different genomes, using updated statistical tests with false discovery rate corrections for multiple testing. The overrepresentation test is also available as a web service, for easy addition to third-party sites.

Anushya Muruganujan,  Chris Thomas,  Huaiyu Mi … (2013)
The PANTHER (protein annotation through evolutionary relationship) classification system (http://www.pantherdb.org/) is a comprehensive system that combines gene function, ontology, pathways and statistical analysis tools that enable biologists to analyze large-scale, genome-wide data from sequencing, proteomics or gene expression experiments. The system is built with 82 complete genomes organized into gene families and subfamilies, and their evolutionary relationships are captured in phylogenetic trees, multiple sequence alignments and statistical models (hidden Markov models or HMMs). Genes are classified according to their function in several different ways: families and subfamilies are annotated with ontology terms (Gene Ontology (GO) and PANTHER protein class), and sequences are assigned to PANTHER pathways. The PANTHER website includes a suite of tools that enable users to browse and query gene functions, and to analyze large-scale experimental data with a number of statistical tests. It is widely used by bench scientists, bioinformaticians, computer scientists and systems biologists. In the 2013 release of PANTHER (v.8.0), in addition to an update of the data content, we redesigned the website interface to improve both user experience and the system's analytical capability. This protocol provides a detailed description of how to analyze genome-wide experimental data with the PANTHER classification system.