c-type Lysozymes: what do their introns hide? 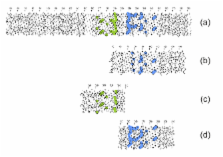 Adaptive evolution in the stomach lysozymes of foregut fermenters.

Jeffery C B Stewart,  J W Schilling,  A Wilson (2015)
The convergent evolution of a fermentative foregut in two groups of mammals offers an opportunity to study adaptive evolution at the protein level. The appearance of this mode of digestion has been accompanied by the recruitment of lysozyme as a bacteriolytic enzyme in the stomach both in the ruminants (for example the cow) and later in the colobine monkeys (for example the langur). The stomach lysozymes of these two groups share some physicochemical and catalytic properties that appear to adapt them for functioning in the stomach fluid. To examine the basis for these shared properties, we sequenced langur stomach lysozyme and compared it to other lysozymes of known sequence. Tree analysis suggest that, after foregut fermentation arose in monkeys, the langur lysozyme gained sequence similarity to cow stomach lysozyme and evolved two times faster than the other primate lysozymes. This rapid evolution, coupled with functional and sequence convergence upon cow stomach lysozyme, could imply that positive darwinian selection has driven about 50% of the evolution of langur stomach lysozyme.