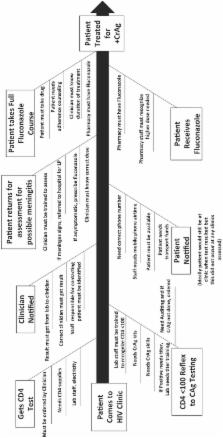 During a CrAg screening program in Kampala, Uganda, we interviewed 15 health care workers (2 coordinating research nurses and 13 clinic personnel) from 6 HIV clinics between March and April 2017, to identify barriers to implementation as well as facilitating factors for program success. The interviews were coded and themes compiled.

We found key factors for successful implementation of a CrAg screening program were: adequate supplies of fluconazole and CrAg lateral flow assay (LFA) point-of-care tests, timely patient follow-up, and quick turnaround time of laboratory results. Although both CrAg LFA kits and fluconazole are on the national formulary, stockouts are common, affecting patient care. The CrAg screening recommendation by national HIV guidelines remains integral to the success of the program, as overburdened clinics are otherwise reluctant to adopt additional screening. Collaboration with Ministries of Health for support with enforcing national guidelines, and procuring supplies is paramount to a successful CrAg screening program.

Development of a CrAg screening and treatment program within the HIV clinic infrastructure has a number of barriers. Education and training of clinic staff, along with partnership with the Ministry of Health to ensure adequate supplies, facilitated the program.

Cryptococcal infection in a cohort of HIV-1-infected Ugandan adults.

David Lalloo,  Eric Lugada,  Jessica Nakiyingi-Miiro … (2002)
Despite the recognition of Cryptococcus neoformans as a major cause of meningitis in HIV-infected adults in sub-Saharan Africa, little is known about the relative importance of this potentially preventable infection as a cause of mortality and suffering in HIV-infected adults in this region. A cohort study of 1372 HIV-1-infected adults, enrolled and followed up between October 1995 and January 1999 at two community clinics in Entebbe, Uganda. Systematic and standardized assessment of illness episodes to describe cryptococcal disease and death rates. Cryptococcal disease was diagnosed in 77 individuals (rate 40.4/1000 person-years) and was associated with 17% of all deaths (77 out of 444) in the cohort. Risk of infection was strongly associated with CD4 T cell counts 100 days in 11% of patients). Survival following diagnosis was poor (median survival 26 days; range 0-138). Cryptococcal infection is an important contributor to mortality and suffering in HIV-infected Ugandans. Improvements in access to effective therapy of established disease are necessary. In addition, prevention strategies, in particular chemoprophylaxis, should be evaluated while awaiting the outcome of initiatives to make antiretroviral therapy more widely available.

Evaluation of screening and treatment of cryptococcal antigenaemia among HIV-infected persons in Soweto, South Africa.

This is an open access article distributed under the terms of the Creative Commons Attribution-Non Commercial-No Derivatives License 4.0 (CCBY-NC-ND), where it is permissible to download and share the work provided it is properly cited. The work cannot be changed in any way or used commercially without permission from the journal. http://creativecommons.org/licenses/by-nc-nd/4.0