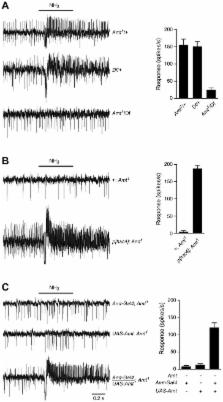 Many insect vectors of disease detect their hosts through olfactory cues, and thus it is of great interest to understand better how odors are encoded. However, little is known about the molecular underpinnings that support the unique function of coeloconic sensilla, an ancient and conserved class of sensilla that detect amines and acids, including components of human odor that are cues for many insect vectors. Here, we generate antennal transcriptome databases both for wild type Drosophila and for a mutant that lacks coeloconic sensilla. We use these resources to identify genes whose expression is highly enriched in coeloconic sensilla, including many genes not previously implicated in olfaction. Among them, we identify an ammonium transporter gene that is essential for ammonia responses in a class of coeloconic olfactory receptor neurons (ORNs), but is not required for responses to other odorants. Surprisingly, the transporter is not expressed in ORNs, but rather in neighboring auxiliary cells. Thus, our data reveal an unexpected non-cell autonomous role for a component that is essential to the olfactory response to ammonia. The defective response observed in a Drosophila mutant of this gene is rescued by its Anopheles ortholog, and orthologs are found in virtually all insect species examined, suggesting that its role is conserved. Taken together, our results provide a quantitative analysis of gene expression in the primary olfactory organ of Drosophila, identify molecular components of an ancient class of olfactory sensilla, and reveal that auxiliary cells, and not simply ORNs, play an essential role in the coding of an odor that is a critical host cue for many insect vectors of human disease.

Olfaction underlies the attraction of insect pests and vectors of disease to their plant and human hosts. In the genetic model insect Drosophila, the neuronal basis of odor coding has been extensively analyzed in the antenna, its major olfactory organ, but the molecular basis of odor coding has not. Additionally, there has been little analysis of any olfactory cells other than neurons. We have undertaken a comprehensive and quantitative analysis of gene expression in the Drosophila antenna. This analysis revealed a surprisingly broad dynamic range of odor receptor and odor binding protein expression, and unexpected expression of taste receptor genes. Further analysis identified 250 genes that are expressed at reduced levels in a mutant lacking an evolutionarily ancient class of sensilla, antennal hairs housing neurons that respond to human odors. One of these genes, a transporter, is expressed in non-neuronal cells but is essential to the response of a neuron to ammonia, a key cue for insect vectors of disease. A mutation in this transporter can be rescued by its mosquito homolog. While many studies of sensory coding consider the neural circuit in isolation, our analysis reveals an essential role for an auxiliary cell.

Molecular mechanisms of metabolic resistance to synthetic and natural xenobiotics.

Xianchun Li,  Mary Schuler,  May Berenbaum (2007)
Xenobiotic resistance in insects has evolved predominantly by increasing the metabolic capability of detoxificative systems and/or reducing xenobiotic target site sensitivity. In contrast to the limited range of nucleotide changes that lead to target site insensitivity, many molecular mechanisms lead to enhancements in xenobiotic metabolism. The genomic changes that lead to amplification, overexpression, and coding sequence variation in the three major groups of genes encoding metabolic enzymes, i.e., cytochrome P450 monooxygenases (P450s), esterases, and glutathione-S-transferases (GSTs), are the focus of this review. A substantial number of the adaptive genomic changes associated with insecticide resistance that have been characterized to date are transposon mediated. Several lines of evidence suggest that P450 genes involved in insecticide resistance, and perhaps insecticide detoxification genes in general, may share an evolutionary association with genes involved in allelochemical metabolism. Differences in the selective regime imposed by allelochemicals and insecticides may account for the relative importance of regulatory or structural mutations in conferring resistance.

Construction of transgenic Drosophila by using the site-specific integrase from phage phiC31.

Michele Calos,  M. B. Fish,  C Groth … (2004)
The phiC31 integrase functions efficiently in vitro and in Escherichia coli, yeast, and mammalian cells, mediating unidirectional site-specific recombination between its attB and attP recognition sites. Here we show that this site-specific integration system also functions efficiently in Drosophila melanogaster in cultured cells and in embryos. Intramolecular recombination in S2 cells on transfected plasmid DNA carrying the attB and attP recognition sites occurred at a frequency of 47%. In addition, several endogenous pseudo attP sites were identified in the fly genome that were recognized by the integrase and used as substrates for integration in S2 cells. Two lines of Drosophila were created by integrating an attP site into the genome with a P element. phiC31 integrase injected into embryos as mRNA functioned to promote integration of an attB-containing plasmid into the attP site, resulting in up to 55% of fertile adults producing transgenic offspring. A total of 100% of these progeny carried a precise integration event at the genomic attP site. These experiments demonstrate the potential for precise genetic engineering of the Drosophila genome with the phiC31 integrase system and will likely benefit research in Drosophila and other insects.

S Thibault,  Brett Milash,  Jasmine Francis … (2004)
With the availability of complete genome sequence for Drosophila melanogaster, one of the next strategic goals for fly researchers is a complete gene knockout collection. The P-element transposon, the workhorse of D. melanogaster molecular genetics, has a pronounced nonrandom insertion spectrum. It has been estimated that 87% saturation of the approximately 13,500-gene complement of D. melanogaster might require generating and analyzing up to 150,000 insertions. We describe specific improvements to the lepidopteran transposon piggyBac and the P element that enabled us to tag and disrupt genes in D. melanogaster more efficiently. We generated over 29,000 inserts resulting in 53% gene saturation and a more diverse collection of phenotypically stronger insertional alleles. We found that piggyBac has distinct global and local gene-tagging behavior from that of P elements. Notably, piggyBac excisions from the germ line are nearly always precise, piggyBac does not share chromosomal hotspots associated with P and piggyBac is more effective at gene disruption because it lacks the P bias for insertion in 5' regulatory sequences.

This research was supported by grants from the National Institutes of Health (NIH) to JRC and a National Research Service Award (NIH F32DC011242) to KM, and by an National Science Foundation Graduate Research Fellowship to NKL. The funders had no role in study design, data collection and analysis, decision to publish, or preparation of the manuscript.

Data Availability The authors confirm that all data underlying the findings are fully available without restriction. All relevant data are within the paper and its Supporting Information files.
Data availability:
ScienceOpen disciplines: Genetics