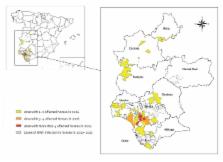 In Andalusia, Spain, West Nile virus (WNV) surveillance takes place from April to November, during the active vector period. Within this area seroconversion to this virus was evidenced in wild birds in 2004, affecting horses and two humans for the first time in 2010. Since 2010, the virus has been isolated every year in horses, and national and regional surveillance plans have been updated with the epidemiological changes found. WNV is spreading rapidly throughout southern Europe and has caused outbreaks in humans. Here we describe the second WNV outbreak in humans in Andalusia, with three confirmed cases, which occurred between August and September 2016, and the measures carried out to control it. Surveillance during the transmission season is essential to monitor and ensure prompt identification of any outbreaks.

Comparison of flavivirus universal primer pairs and development of a rapid, highly sensitive heminested reverse transcription-PCR assay for detection of flaviviruses targeted to a conserved region of the NS5 gene sequences.

J M Crance,  D A DeBriel,  F Stoll … (2001)
Arthropod-transmitted flaviviruses are responsible for considerable morbidity and mortality, causing severe encephalitic, hemorrhagic, and febrile illnesses in humans. Because there are no specific clinical symptoms for infection by a determined virus and because different arboviruses could be present in the same area, a genus diagnosis by PCR would be a useful first-line diagnostic method. The six published Flavivirus genus primer pairs localized in the NS1, NS3, NS5, and 3' NC regions were evaluated in terms of specificity and sensitivity with flaviviruses (including the main viruses pathogenic for humans) at a titer of 10(5) 50% tissue culture infectious doses (TCID(50)s) ml(-1) with a common identification step by agarose gel electrophoresis. Only one NS5 primer pair allowed the detection of all tested flaviviruses with the sensitivity limit of 10(5) TCID(50)s ml(-1). Using a heminested PCR with new primers designed in the same region after an alignment of 30 different flaviviruses, the sensitivity of reverse transcription-PCR was improved and allowed the detection of about 200 infectious doses ml(-1) with all of the tick- and mosquito-borne flaviviruses tested. It was confirmed that the sequenced amplified products in the NS5 region allowed predictability of flavivirus species by dendrogram, including the New York 99 West Nile strain. This technique was successfully performed with a cerebrospinal fluid sample from a patient hospitalized with West Nile virus encephalitis.

Excretion of West Nile virus in urine during acute infection.

The challenge of West Nile virus in Europe: knowledge gaps and research priorities.

A A Rizzoli,  M. A. Jiménez-Clavero,  L Barzon … (2015)
West Nile virus (WNV) is continuously spreading across Europe, and other continents, i.e. North and South America and many other regions of the world. Despite the overall sporadic nature of outbreaks with cases of West Nile neuroinvasive disease (WNND) in Europe, the spillover events have increased and the virus has been introduced into new areas. The high genetic diversity of the virus, with remarkable phenotypic variation, and its endemic circulation in several countries, require an intensification of the integrated and multidisciplinary research efforts built under the 7th Framework Programme of the European Union (FP7). It is important to better clarify several aspects of WNV circulation in Europe, including its ecology, genomic diversity, pathogenicity, transmissibility, diagnosis and control options, under different environmental and socio-economic scenarios. Identifying WNV endemic as well as infection-free areas is becoming a need for the development of human vaccines and therapeutics and the application of blood and organs safety regulations. This review, produced as a joint initiative among European experts and based on analysis of 118 scientific papers published between 2004 and 2014, provides the state of knowledge on WNV and highlights the existing knowledge and research gaps that need to be addressed with high priority in Europe and neighbouring countries.