Role of chymase in the local renin-angiotensin system in keloids: inhibition of chymase may be an effective therapeutic approach to treat keloids 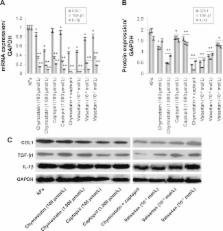 Histologically, keloids contain excess fibroblasts and an overabundance of dermal collagen. Recently, it was reported that chymase induced a profibrotic response via transforming growth factor-β1 (TGF-β1)/Smad activation in keloid fibroblasts (KFs). However, the role of chymase in the local renin-angiotensin system (RAS) in keloids has not been elucidated. This study aims to determine whether chymase plays an important role in the local RAS in keloids.

We compared the expression and activity of chymase in keloids and normal skin tissues using Western blotting and radioimmunoassay, and studied the expression of TGF-β1, interleukin-1β, collagen I, hydroxyproline, and angiotensin II in KFs after chymase and inhibitors’ treatment.

The results revealed an increased activity of chymase in keloid tissues, and that chymase enhanced the expression of angiotensin II, collagen I, TGF-β1, and interleukin-1β in KFs. Blockade of the chymase pathway involved in the local RAS lowered the expression of these signaling factors.

This research suggests that inhibition of chymase might be an effective therapeutic approach to improve the clinical treatment of keloids.

Moises Selman,  Annie Pardo (2001)
Idiopathic pulmonary fibrosis is a chronic and usually progressive lung disorder of unknown etiology. A growing body of evidence suggests that, in contrast to other interstitial lung diseases, IPF is a distinct entity in which inflammation is a secondary and non-relevant pathogenic partner. Evidence includes the presence of similar mild/moderate inflammation either in early or late disease, and the lack of response to potent anti-inflammatory therapy. Additionally, it is clear from experimental models and some human diseases that it is possible to have fibrosis without inflammation. An evolving hypothesis proposes that IPF may result from epithelial micro-injuries and abnormal wound healing.

Angiotensin II and the fibroproliferative response to acute lung injury.

Rachel C. Chambers,  THOMAS UNGER,  Robin McAnulty … (2003)
Angiotensin II (ANG II), generated by activation of local renin-angiotensin systems, is believed to play an important role in tissue repair and remodeling, in part via transforming growth factor-beta (TGF-beta). Angiotensin-converting enzyme (ACE) inhibitors have been shown to abrogate experimental lung injury via a number of potential mechanisms; however, the potentially fibroproliferative role for ANG II in the lung has not been characterized. We hypothesized that, after lung injury, ANG II would stimulate fibroblast procollagen synthesis and promote lung collagen deposition in rats. In vitro, ANG II was a potent inducer of procollagen production in human lung fibroblasts via activation of the type 1 receptor and, at least in part, via the autocrine action of TGF-beta. After bleomycin-induced lung injury, an increase in lung ANG II concentration was observed by day 3 that preceded increases in lung collagen and was maintained until death at day 21. Administration of an ACE inhibitor (ramipril) reduced ACE activity, ANG II concentration, TGF-beta expression, and collagen deposition. Losartan (an ANG II type 1 receptor antagonist) also attenuated the increase in TGF-beta expression and lung collagen deposition. These observations suggest that ANG II, possibly generated locally within the lung, may play an important role in the fibrotic response to acute lung injury, at least in part via the action of TGF-beta. ACE inhibitors and receptor antagonists, already widely used clinically, should be assessed as potential new therapies for fibrotic lung disease.

A Grünert,  J Waltenberger,  Jürgen E. Schneider … (2001)
The aim of this study was to identify fibrogenic mediators stimulating activation, proliferation, and/or matrix synthesis of rat pancreatic stellate cells (PSC). PSC were isolated from the pancreas of normal Wistar rats and from rats with cerulein pancreatitis. Cell activation was demonstrated by immunofluorescence microscopy of smooth muscle alpha-actin (SMA) and real-time quantitative RT-PCR of SMA, fibronectin, and transforming growth factor (TGF)-beta(1). Proliferation was measured by bromodeoxyuridine incorporation. Matrix synthesis was demonstrated on the protein and mRNA level. Within a few days in primary culture, PSC changed their phenotype from fat-storing to SMA-positive myofibroblast-like cells expressing platelet-derived growth factor (PDGF) alpha- and PDGF beta-receptors. TGF-beta(1) and tumor necrosis factor (TNF)-alpha accelerated the change in the cells' phenotype. Addition of 50 ng/ml PDGF and 5 ng/ml basic fibroblast growth factor (bFGF) to cultured PSC significantly stimulated cell proliferation (4.37 +/- 0.49- and 2.96 +/- 0.39-fold of control). Fibronectin synthesis calculated on the basis of DNA was stimulated by 5 ng/ml bFGF (3.44 +/- 1.13-fold), 5 ng/ml TGF-beta(1) (2.46 +/- 0.89-fold), 20 ng/ml PDGF (2.27 +/- 0.68-fold), and 50 ng/ml TGF-alpha (1.87 +/- 0.19-fold). As shown by RT-PCR, PSC express predominantly the splice variant EIII-A of fibronectin. Immunofluorescence microscopy and Northern blot confirmed that in particular bFGF and TGF-beta(1) stimulated the synthesis of fibronectin and collagens type I and III. In conclusion, our data demonstrate that 1) TGF-beta(1) and TNF-alpha accelerate the change in the cell phenotype, 2) PDGF represents the most effective mitogen, and 3) bFGF, TGF-beta(1), PDGF, and, to a lesser extent, TGF-alpha stimulate extracellular matrix synthesis of cultured rat PSC.