Serial pathologic fractures of five long bones on four separate occasions in a patient with primary hyperparathyroidism, challenges of management in a developing country: a case report 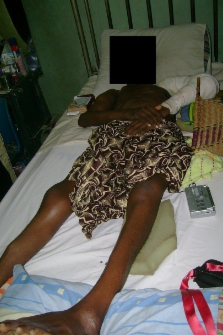 R Udelsman,  William P. Donovan,  Lori Sokoll (2000)
To review the outcomes of 100 consecutive minimally invasive parathyroid explorations. Minimally invasive parathyroidectomy (MIP) has challenged the traditional approach of bilateral neck exploration for patients with primary hyperparathyroidism. Most patients with primary hyperparathyroidism have a single adenoma that when resected results in cure. It therefore appears logical to perform a directed approach to adenoma extirpation. MIP involves high-quality sestamibi images obtained with single photon emission computed tomography to localize enlarged parathyroid glands in three dimensions, limited exploration after surgeon-administered cervical block anesthesia, rapid intraoperative parathyroid hormone assay to confirm the adequacy of resection, and discharge within 1 to 3 hours of surgery. MIP was offered to 100 selected consecutive patients during an 18-month period beginning in March 1998. Ninety-two cases were accomplished under cervical block anesthesia and 89 of these on an ambulatory basis. The cure rate was 100%, and there were no long-term complications. The mean hospital charge for MIP was less than 40% of that associated with traditional exploration. Outpatient MIP appears to be the procedure of choice for most patients with primary hyperparathyroidism.

Clinical manifestations of primary hyperparathyroidism before and after parathyroidectomy. A case-control study.

The Pan African Medical Journal - ISSN 1937-8688. This is an Open Access article distributed under the terms of the Creative Commons Attribution License which permits unrestricted use, distribution, and reproduction in any medium, provided the original work is properly cited.