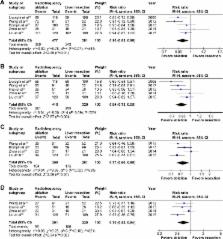 The Cochrane Library (Issue 3, 2015), Embase (1974 to March 15, 2015), PubMed (1950 to March 15, 2015), Web of Science (1900 to March 15, 2015), and Chinese Biomedical Literature Database (1978 to March 15, 2015) were searched to identify relevant trials. Only trials that compared radiofrequency ablation and liver resection for single very early stage (≤2 cm) or early stage (≤3 cm) HCC according to the Barcelona clinic liver cancer (BCLC) staging system were considered for inclusion in this review. The primary outcomes that we analyzed were the 3-year and 5-year overall survival (OS) rates, and the secondary outcomes that we analyzed were the 3-year and 5-year disease-free survival (DFS) rates. Review Manager 5.3 was used to perform a cumulative meta-analysis. Possible publication bias was examined using a funnel plot. A random-effects model was applied to summarize the various outcomes.

Asian Pacific Association for the Study of the Liver consensus recommendations on hepatocellular carcinoma.

Y Chawla,  Pierce Chow,  Jenq-Chang Lee … (2010)
The Asian Pacific Association for the Study of the Liver (APASL) convened an international working party on the management of hepatocellular carcinoma (HCC) in December 2008 to develop consensus recommendations. The working party consisted of expert hepatologist, hepatobiliary surgeon, radiologist, and oncologist from Asian-Pacific region, who were requested to make drafts prior to the consensus meeting held at Bali, Indonesia on 4 December 2008. The quality of existing evidence and strength of recommendations were ranked from 1 (highest) to 5 (lowest) and from A (strongest) to D (weakest), respectively, according to the Oxford system of evidence-based approach for developing the consensus statements. Participants of the consensus meeting assessed the quality of cited studies and assigned grades to the recommendation statements. Finalized recommendations were presented at the fourth APASL single topic conference on viral-related HCC at Bali, Indonesia and approved by the participants of the conference.

Sustained complete response and complications rates after radiofrequency ablation of very early hepatocellular carcinoma in cirrhosis: Is resection still the treatment of choice?

Carmine Tinelli,  Franca Meloni,  Tito Livraghi … (2007)
If liver transplantation is not feasible, partial resection is considered the treatment of choice for hepatocellular carcinoma (HCC) in patients with cirrhosis. However, in some centers the first-line treatment for small, single, operable HCC is now radiofrequency ablation (RFA). In the current study, 218 patients with single HCC