A Non-Lipolysis Nanoemulsion Improved Oral Bioavailability by Reducing the First-Pass Metabolism of Raloxifene, and Related Absorption Mechanisms Being Studied 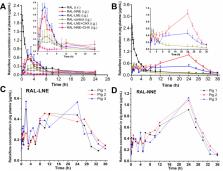 A non-lipolysis nanoemulsion (NNE) was designed to reduce the first-pass metabolism of raloxifene (RAL) by intestinal UDP-glucuronosyltransferases (UGTs) for increasing the oral absorption of RAL, coupled with in vitro and in vivo studies.

In vitro stability of NNE was evaluated by lipolysis and the UGT metabolism system. The oral bioavailability of NNE was studied in rats and pigs. Finally, the absorption mechanisms of NNE were investigated by in situ single-pass intestinal perfusion (SPIP) in rats, Madin-Darby canine kidney (MDCK) cells model, and lymphatic blocking model.

The pre-NNE consisted of isopropyl palmitate, linoleic acid, Cremophor RH40, and ethanol in a weight ratio of 3.33:1.67:3:2. Compared to lipolysis nanoemulsion of RAL (RAL-LNE), the RAL-NNE was more stable in in vitro gastrointestinal buffers, lipolysis, and UGT metabolism system ( p < 0.05). The oral bioavailability was significantly improved by the NNE (203.30%) and the LNE (205.89%) relative to the suspension group in rats. However, 541.28% relative bioavailability was achieved in pigs after oral NNE intake compared to the suspension and had two-fold greater bioavailability than the LNE ( p < 0.05). The RAL-NNE was mainly absorbed in the jejunum and had high permeability at the intestine of rats. The results of both SPIP and MDCK cell models demonstrated that the RAL-NNE was absorbed via endocytosis mediated by caveolin and clathrin. The other absorption route, the lymphatic transport (cycloheximide as blocking agent), was significantly improved by the NNE compared with the LNE ( p < 0.05).

Cremophor EL: the drawbacks and advantages of vehicle selection for drug formulation.

K Nooter,  A Sparreboom,  Jaco Verweij … (2001)
Cremophor EL (CrEL) is a formulation vehicle used for various poorly-water soluble drugs, including the anticancer agent paclitaxel (Taxol). In contrast to earlier reports, CrEL is not an inert vehicle, but exerts a range of biological effects, some of which have important clinical implications. Its use has been associated with severe anaphylactoid hypersensitivity reactions, hyperlipidaemia, abnormal lipoprotein patterns, aggregation of erythrocytes and peripheral neuropathy. The pharmacokinetic behaviour of CrEL is dose-independent, although its clearance is highly influenced by duration of the infusion. This is particularly important since CrEL can affect the disposition of various drugs by changing the unbound drug concentration through micellar encapsulation. In addition, it has been shown that CrEL, as an integral component of paclitaxel chemotherapy, modifies the toxicity profile of certain anticancer agents given concomitantly, by mechanisms other than kinetic interference. A clear understanding of the biological and pharmacological role of CrEL is essential to help oncologists avoid side-effects associated with the use of paclitaxel or other agents using this vehicle. With the present development of various new anticancer agents, it is recommended that alternative formulation approaches should be pursued to allow a better control of the toxicity of the treatment and the pharmacological interactions related to the use of CrEL.

Targeting of nanoparticles to the clathrin-mediated endocytic pathway.

Oshrat Harush-Frenkel,  Nir Debotton,  Simon Benita … (2007)
Nanoparticles (NPs) are considered attractive carriers for gene therapy and drug delivery owing to their minor toxic effect and their ability to associate and internalize into mammalian cells. In this study, we compared the endocytosis into HeLa cells of NPs exposing either a negative or positive charge on their surface. The exposed charge significantly affected their ability to internalize as well as the cellular endocytosis mechanism utilized. Negatively charged NPs show an inferior rate of endocytosis and do not utilize the clathrin-mediated endocytosis pathway. On the other hand, positively charged NPs internalize rapidly via the clathrin-mediated pathway. When this pathway is blocked, NPs activate a compensatory endocytosis pathway that results in even higher accumulation of NPs. Overall, the addition of a positive charge to NPs may improve their potential as nanoparticulate carriers for drug delivery.

Nicolas Anton,  Thierry Vandamme (2011)
Much research has been done over the past years on self-emulsifying drug delivery systems, their main interest being the simplicity of the formulation processes, the great stability of the systems and their high potential in pharmaceutical applications and industrial scaling-up. Self-emulsifying drug delivery systems are generally described in the literature indiscriminately as either nano-emulsions or micro-emulsions. Although this misconception appears to be common, these two systems are fundamentally different, based on very different physical and physicochemical concepts. Their differences result in very different stability behaviors, which can have significant consequences regarding their applications and administration as nanomedicines. This paper aims at clarifying the problem, first by reviewing all the physical and physicochemical fundamentals regarding these two systems, using a quantitative thermodynamic approach for micro-emulsions. Following these clarifications, we show how the confusion between nano-emulsions and micro-emulsions appears in the literature and how most of the micro-emulsion systems referred to are actually nano-emulsion systems. Finally, we illustrate how to clear up this misconception using simple experiments. Since this confusion is well established in the literature, such clarifications seem necessary in order to improve the understanding of research in this important field.