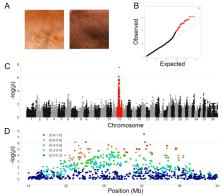 Dogs exhibit a wide variety of coat color types, and many genes have been identified that control pigment production, appearance, and distribution. Some breeds, such as the Nova Scotia Duck Tolling Retriever (NSDTR), exhibit variation in pheomelanin pigment intensity that is not explained by known genetic variants. A genome-wide association study comparing light red to dark red in the NSDTR identified a significantly associated region on canine chromosome 15 (CFA 15:23 Mb–38 Mb). Coverage analysis of whole genome sequence data from eight dogs identified a 6 kb copy number variant (CNV) 152 kb upstream of KITLG. Genotyping with digital droplet PCR (ddPCR) confirmed a significant association between an increased copy number with the dark-red coat color in NSDTR ( p = 6.1 × 10 −7). The copy number of the CNV was also significantly associated with coat color variation in both eumelanin and pheomelanin-based Poodles ( p = 1.5 × 10 −8, 4.0 × 10 −9) and across other breeds. Moreover, the copy number correlated with pigment intensity along the hair shaft in both pheomelanin and eumelanin coats. KITLG plays an important role in melanogenesis, and variants upstream of KITLG have been associated with coat color variation in mice as well as hair color in humans consistent with its role in the domestic dog.

Badri Padhukasahasram,  Sophie Candille,  Hua Tang … (2009)
Morphological diversity within closely related species is an essential aspect of evolution and adaptation. Mutations in the Melanocortin 1 receptor (Mc1r) gene contribute to pigmentary diversity in natural populations of fish, birds, and many mammals. However, melanism in the gray wolf, Canis lupus, is caused by a different melanocortin pathway component, the K locus, that encodes a beta-defensin protein that acts as an alternative ligand for Mc1r. We show that the melanistic K locus mutation in North American wolves derives from past hybridization with domestic dogs, has risen to high frequency in forested habitats, and exhibits a molecular signature of positive selection. The same mutation also causes melanism in the coyote, Canis latrans, and in Italian gray wolves, and hence our results demonstrate how traits selected in domesticated species can influence the morphological diversity of their wild relatives.