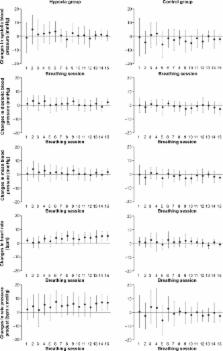 Physiological adaptation of the cardiovascular system to high altitude.

Robert Naeije (2010)
Altitude exposure is associated with major changes in cardiovascular function. The initial cardiovascular response to altitude is characterized by an increase in cardiac output with tachycardia, no change in stroke volume, whereas blood pressure may temporarily be slightly increased. After a few days of acclimatization, cardiac output returns to normal, but heart rate remains increased, so that stroke volume is decreased. Pulmonary artery pressure increases without change in pulmonary artery wedge pressure. This pattern is essentially unchanged with prolonged or lifelong altitude sojourns. Ventricular function is maintained, with initially increased, then preserved or slightly depressed indices of systolic function, and an altered diastolic filling pattern. Filling pressures of the heart remain unchanged. Exercise in acute as well as in chronic high-altitude exposure is associated with a brisk increase in pulmonary artery pressure. The relationships between workload, cardiac output, and oxygen uptake are preserved in all circumstances, but there is a decrease in maximal oxygen consumption, which is accompanied by a decrease in maximal cardiac output. The decrease in maximal cardiac output is minimal in acute hypoxia but becomes more pronounced with acclimatization. This is not explained by hypovolemia, acid-bases status, increased viscosity on polycythemia, autonomic nervous system changes, or depressed systolic function. Maximal oxygen uptake at high altitudes has been modeled to be determined by the matching of convective and diffusional oxygen transport systems at a lower maximal cardiac output. However, there has been recent suggestion that 10% to 25% of the loss in aerobic exercise capacity at high altitudes can be restored by specific pulmonary vasodilating interventions. Whether this is explained by an improved maximum flow output by an unloaded right ventricle remains to be confirmed. Altitude exposure carries no identified risk of myocardial ischemia in healthy subjects but has to be considered as a potential stress in patients with previous cardiovascular conditions.

Nanduri R. Prabhakar,  Ying-Jie Peng,  Frank J Jacono … (2015)
1. Humans experiencing intermittent hypoxia (IH) owing to recurrent apnoea syndromes exhibit serious cardiovascular morbidity, including high blood pressure, increased sympathetic nerve activity, cardiac arrhythmia and myocardial infarction. Although apnoeas are accompanied by a simultaneous decrease in arterial O(2) (hypoxia) and an increase in CO(2) (hypercapnia), studies on experimental animals suggest that hypoxia, rather than hypercapnia, is the primary stimulus for developing hypertension and enhanced sympathetic nerve activity. Enhanced hypoxic-sensing ability of the carotid bodies and the ensuing reflex activation of the sympathetic nervous system have been suggested to play a critical role in cardiorespiratory alterations resulting from recurrent apnoeas. 2. The purpose of the present review is to highlight recent studies demonstrating the effects of IH on carotid body sensory activity and its consequences on sympathetic activation in a rodent model of chronic IH. Adult rats exposed to chronic IH (15 s of 5% O(2) followed by 5 min of 21% O(2), nine episodes per h, 8 h/day for 10 days) exhibited selective enhancement of carotid body sensory response to hypoxia. In addition, chronic IH induced a novel form of sensory plasticity in the carotid body, manifested as sensory long-term facilitation (LTF). Functional changes in the carotid body occurred in the absence of morphological changes in the chemoreceptor tissue. 3. Acute hypoxia increased expiratory modulated splanchnic nerve activity (SNA) and acute IH-induced LTF in SNA. Hypoxia-induced SNA activation was prevented by bilateral sectioning of the sinus nerves. Rats exposed to chronic IH exhibited enhanced hypoxia-induced sympathetic activation and augmented LTF of the SNA. Bilateral sectioning of the sinus nerves abolished these responses, suggesting chronic IH-induced alterations in carotid body sensitivity contribute to LTF in SNA and the subsequent cardiovascular alterations.