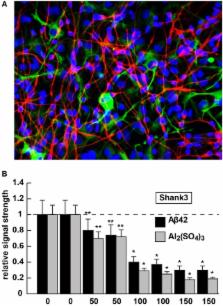 Signaling between neurons in the human central nervous system (CNS) is accomplished through a highly interconnected network of presynaptic and postsynaptic elements essential in the conveyance of electrical and neurochemical information. One recently characterized core postsynaptic element essential to the efficient operation of this complex network is a relatively abundant ~184.7 kDa proline-rich synapse-associated cytoskeletal protein known as Shank3 (SH3-ankyrin repeat domain; encoded at human chr 22q13.33). In this “ Perspectives” article, we review and comment on current advances in Shank3 research and include some original data that show common Shank3 deficits in a number of seemingly unrelated human neurological disorders that include sporadic Alzheimer’s disease (AD), autism spectrum disorder (ASD), bipolar disorder (BD), Phelan–McDermid syndrome (PMS; 22q13.3 deletion syndrome), and schizophrenia (SZ). Shank3 was also found to be downregulated in the CNS of the transgenic AD (TgAD) 5x familial Alzheimer’s disease murine model engineered to overexpress the 42 amino acid amyloid-beta (Aβ42) peptide. Interestingly, the application of known pro-inflammatory stressors, such as the Aβ42 peptide and the metal-neurotoxin aluminum sulfate, to human neuronal–glial cells in primary culture resulted in a significant decrease in the expression of Shank3. These data indicate that deficits in Shank3-expression may be one common denominator linking a wide-range of human neurological disorders that exhibit a progressive or developmental synaptic disorganization that is temporally associated with cognitive decline.

Yuan Mei-Rong,  Patricia Monteiro,  Yang Zhou … (2016)
Because ASD is a neurodevelopmental disorder and patients typically display symptoms before the age of three 1 , one of the key questions in autism research is whether the pathology is reversible in adults. Here we investigated the developmental requirement of Shank3, one of the most prominent monogenic ASD genes that is estimated to contribute to ~1% of all ASD cases 2–6 . SHANK3 is a postsynaptic scaffold protein that regulates synaptic development, function and plasticity by orchestrating the assembly of postsynaptic density (PSD) macromolecular signaling complex 7–9 . Disruptions of the Shank3 gene in mouse models have resulted in synaptic defects and autistic-like behaviors including anxiety, social interaction deficits, and repetitive behavior 10–13 . We generated a novel Shank3 conditional knock-in mouse model and used it to demonstrate that re-expression of the Shank3 gene in adult led to improvements in synaptic protein composition, spine density and neural function in the striatum. We also provided behavioral evidence that certain behavioral abnormalities including social interaction deficit and repetitive grooming behavior could be rescued, while anxiety and motor coordination deficit could not be recovered in adulthood. Together, these results elucidate the profound impact of post-developmental activation of Shank3 expression on neural function and demonstrate certain degree of continued plasticity in the adult diseased brain.

Stefânia Forner,  David Baglietto-Vargas,  Alessandra C Martini … (2017)
Alzheimer's disease (AD) is characterized by memory loss, cognitive decline, and devastating neurodegeneration, not only as a result of the extracellular accumulation of beta-amyloid peptide (Aβ) and intracellular accumulation of tau, but also as a consequence of the dysfunction and loss of synapses. Although significant advances have been made in our understanding of the relationship of the pathological role of Aβ and tau in synapse dysfunction, several questions remain as to how Aβ and tau interdependently cause impairments in synaptic function in AD. Overall, more insight into these questions should enable researchers in this field to develop novel therapeutic targets to mitigate or delay the cognitive deficits associated with this devastating disease.

Single β-actin mRNA detection in neurons reveals a mechanism for regulating its translatability.

Robert H. Singer,  Bin Wu,  A Buxbaum (2014)
The physical manifestation of learning and memory formation in the brain can be expressed by strengthening or weakening of synaptic connections through morphological changes. Local actin remodeling underlies some forms of plasticity and may be facilitated by local β-actin synthesis, but dynamic information is lacking. In this work, we use single-molecule in situ hybridization to demonstrate that dendritic β-actin messenger RNA (mRNA) and ribosomes are in a masked, neuron-specific form. Chemically induced long-term potentiation prompts transient mRNA unmasking, which depends on factors active during synaptic activity. Ribosomes and single β-actin mRNA motility increase after stimulation, indicative of release from complexes. Hence, the single-molecule assays we developed allow for the quantification of activity-induced unmasking and availability for active translation. Further, our work demonstrates that β-actin mRNA and ribosomes are in a masked state that is alleviated by stimulation.

Specialty section: This article was submitted to Neurodegeneration, a section of the journal Frontiers in Neurology