Risk preferences and attitudes to surgery in decision making : A survey of Swedish orthopedic surgeons 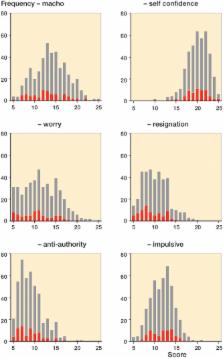 946 Swedish orthopedic surgeons were invited to participate in an online survey. A radiograph of a 4-fragment proximal humeral fracture was presented together with 5 different patient characteristics, and the surgeons could choose between 3 different operative treatments and 1 nonoperative treatment. This was followed by an economic risk-preference test, and then by an instrument designed to measure 6 attitudes to surgery that are thought to be hazardous. We then investigated if choice of non-operative treatment was associated with risk aversion, and thereafter with the other variables, by regression analysis.

388 surgeons responded. Nonoperative treatment for all cases was suggested by 64 of them. There was no significant association between risk aversion and tendency to avoid surgery. However, there was a statistically significant association between suggesting to operate at least 1 of the cases and a "macho" attitude to surgery or resignation regarding the chances of influencing the outcome of surgery. Choosing nonoperative treatment for all cases was associated with long experience as a surgeon.

The discrepancy between available evidence for surgery and clinical practice does not appear to be related to risk preference, but relates to hazardous attitudes. It appears that choosing nonoperative treatment requires experience and a feeling that one can make a difference (i.e. a low score for resignation). There is a need for better awareness of available evidence for surgical indications.

Raine Sihvonen, Mika Paavola, Antti Malmivaara … (2013)
Arthroscopic partial meniscectomy is one of the most common orthopedic procedures, yet rigorous evidence of its efficacy is lacking. We conducted a multicenter, randomized, double-blind, sham-controlled trial in 146 patients 35 to 65 years of age who had knee symptoms consistent with a degenerative medial meniscus tear and no knee osteoarthritis. Patients were randomly assigned to arthroscopic partial meniscectomy or sham surgery. The primary outcomes were changes in the Lysholm and Western Ontario Meniscal Evaluation Tool (WOMET) scores (each ranging from 0 to 100, with lower scores indicating more severe symptoms) and in knee pain after exercise (rated on a scale from 0 to 10, with 0 denoting no pain) at 12 months after the procedure. In the intention-to-treat analysis, there were no significant between-group differences in the change from baseline to 12 months in any primary outcome. The mean changes (improvements) in the primary outcome measures were as follows: Lysholm score, 21.7 points in the partial-meniscectomy group as compared with 23.3 points in the sham-surgery group (between-group difference, -1.6 points; 95% confidence interval [CI], -7.2 to 4.0); WOMET score, 24.6 and 27.1 points, respectively (between-group difference, -2.5 points; 95% CI, -9.2 to 4.1); and score for knee pain after exercise, 3.1 and 3.3 points, respectively (between-group difference, -0.1; 95% CI, -0.9 to 0.7). There were no significant differences between groups in the number of patients who required subsequent knee surgery (two in the partial-meniscectomy group and five in the sham-surgery group) or serious adverse events (one and zero, respectively). In this trial involving patients without knee osteoarthritis but with symptoms of a degenerative medial meniscus tear, the outcomes after arthroscopic partial meniscectomy were no better than those after a sham surgical procedure. (Funded by the Sigrid Juselius Foundation and others; ClinicalTrials.gov number, NCT00549172.).

Martin Lutz, Moritz C Deml, Rohit Arora … (2011)
Despite the recent trend toward the internal fixation of distal radial fractures in older patients, the currently available literature lacks adequate randomized trials examining whether open reduction and internal fixation (ORIF) with a volar locking plate is superior to nonoperative (cast) treatment. The purpose of the present randomized clinical trial was to compare the outcomes of two methods that were used for the treatment of displaced and unstable distal radial fractures in patients sixty-five years of age or older: (1) ORIF with use of a volar locking plate and (2) closed reduction and plaster immobilization (casting). A prospective randomized study was performed. Seventy-three patients with a displaced and unstable distal radial fracture were randomized to ORIF with a volar locking plate (n = 36) or closed reduction and cast immobilization (n = 37). The outcome was measured on the basis of the Patient-Rated Wrist Evaluation (PRWE) score; the Disabilities of the Arm, Shoulder and Hand (DASH) score; the pain level; the range of wrist motion; the rate of complications; and radiographic measurements including dorsal radial tilt, radial inclination, and ulnar variance. There were no significant differences between the groups in terms of the range of motion or the level of pain during the entire follow-up period (p > 0.05). Patients in the operative treatment group had lower DASH and PRWE scores, indicating better wrist function, in the early postoperative time period (p < 0.05), but there were no significant differences between the groups at six and twelve months. Grip strength was significantly better at all times in the operative treatment group (p < 0.05). Dorsal radial tilt, radial inclination, and radial shortening were significantly better in the operative treatment group than in the nonoperative treatment group at the time of the latest follow-up (p < 0.05). The number of complications was significantly higher in the operative treatment group (thirteen compared with five, p < 0.05). At the twelve-month follow-up examination, the range of motion, the level of pain, and the PRWE and DASH scores were not different between the operative and nonoperative treatment groups. Patients in the operative treatment group had better grip strength through the entire time period. Achieving anatomical reconstruction did not convey any improvement in terms of the range of motion or the ability to perform daily living activities in our cohorts.

Surgical vs nonsurgical treatment of adults with displaced fractures of the proximal humerus: the PROFHER randomized clinical trial.

Amar Rangan, Helen Handoll, Stephen Brealey … (2015)
The need for surgery for the majority of patients with displaced proximal humeral fractures is unclear, but its use is increasing.

This is an Open Access article distributed under the terms of the Creative Commons Attribution-Non-Commercial License ( https://creativecommons.org/licenses/by-nc/3.0)