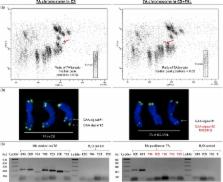 Despite a long history, the production of useful alien introgression lines in wheat remains difficult mainly due to linkage drag and incomplete genetic compensation. In addition, little is known about the molecular mechanisms underlying the impact of foreign chromatin on plant phenotype. Here, a comparison of the transcriptomes of barley, wheat and a wheat–barley 7 HL addition line allowed the transcriptional impact both on 7 HL genes of a non‐native genetic background and on the wheat gene complement as a result of the presence of 7 HL to be assessed. Some 42% (389/923) of the 7 HL genes assayed were differentially transcribed, which was the case for only 3% (960/35 301) of the wheat gene complement. The absence of any transcript in the addition line of a suite of chromosome 7A genes implied the presence of a 36 Mbp deletion at the distal end of the 7 AL arm; this deletion was found to be in common across the full set of Chinese Spring/Betzes barley addition lines. The remaining differentially transcribed wheat genes were distributed across the whole genome. The up‐regulated barley genes were mostly located in the proximal part of the 7 HL arm, while the down‐regulated ones were concentrated in the distal part; as a result, genes encoding basal cellular functions tended to be transcribed, while those encoding specific functions were suppressed. An insight has been gained into gene transcription in an alien introgression line, thereby providing a basis for understanding the interactions between wheat and exotic genes in introgression materials.

Molecular characterization of Ph1 as a major chromosome pairing locus in polyploid wheat.

Michael Wanous,  Frank R. Sharp,  Graham Moore … (2006)
The foundation of western civilization owes much to the high fertility of bread wheat, which results from the stability of its polyploid genome. Despite possessing multiple sets of related chromosomes, hexaploid (bread) and tetraploid (pasta) wheat both behave as diploids at meiosis. Correct pairing of homologous chromosomes is controlled by the Ph1 locus. In wheat hybrids, Ph1 prevents pairing between related chromosomes. Lack of Ph1 activity in diploid relatives of wheat suggests that Ph1 arose on polyploidization. Absence of phenotypic variation, apart from dosage effects, and the failure of ethylmethane sulphonate treatment to yield mutants, indicates that Ph1 has a complex structure. Here we have localized Ph1 to a 2.5-megabase interstitial region of wheat chromosome 5B containing a structure consisting of a segment of subtelomeric heterochromatin that inserted into a cluster of cdc2-related genes after polyploidization. The correlation of the presence of this structure with Ph1 activity in related species, and the involvement of heterochromatin with Ph1 (ref. 6) and cdc2 genes with meiosis, makes the structure a good candidate for the Ph1 locus.

Genetic Control of the Cytologically Diploid Behaviour of Hexaploid Wheat