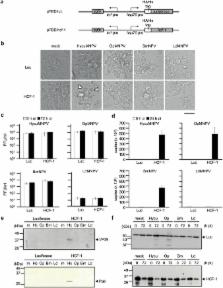 The genome sequence and evolution of baculoviruses.

Elisabeth A. Herniou, Julie Olszewski, Jennifer S. Cory … (2003)
Comparative analysis of the complete genome sequences of 13 baculoviruses revealed a core set of 30 genes, 20 of which have known functions. Phylogenetic analyses of these 30 genes yielded a tree with 4 major groups: the genus Granulovirus (GVs), the group I and II lepidopteran nucleopolyhedroviruses (NPVs), and the dipteran NPV, CuniNPV. These major divisions within the family Baculoviridae were also supported by phylogenies based on gene content and gene order. Gene content mapping has revealed the patterns of gene acquisitions and losses that have taken place during baculovirus evolution, and it has highlighted the fluid nature of baculovirus genomes. The identification of shared protein phylogenetic profiles provided evidence for two putative DNA repair systems and for viral proteins specific for infection of lymantrid hosts. Examination of gene order conservation revealed a core gene cluster of four genes, helicase, lef-5, ac96, and 38K(ac98), whose relative positions are conserved in all baculovirus genomes.

Cloning and characterization of a dronc homologue in the silkworm, Bombyx mori.

Ikue Suganuma, Takayoshi Ushiyama, Hayato Yamada … (2011)
We cloned and characterized a novel Bombyx mori homologue (bm-dronc) of Drosophila melanogaster dronc (dm-dronc), which could encode a polypeptide of 438 amino acid residues. Bm-Dronc shares relatively low amino acid sequence identities of 25% and 26% with Dm-Dronc and Aedes aegypti Dronc (Aa-Dronc), respectively. Bm-Dronc has the sequence QACRG surrounding the catalytic site (C), which is consistent with the QAC(R/Q/G)(G/E) consensus sequence in most caspases but distinct from the sequences PFCRG and SICRG of Dm-Dronc and Aa-Dronc, respectively. Bm-Dronc possesses a long N-terminal prodomain containing a caspase recruitment domain (CARD), a p20 domain and a p10 domain, exhibiting cleavage activities on synthetic substrates Ac-VDVAD-AMC, Ac-IETD-AMC and Ac-LEHD-AMC, which are preferred by human initiator caspases-2, -8 and -9, respectively. Bm-Dronc transiently expressed in insect cells and Escherichia coli cells underwent spontaneous cleavage and caused apoptosis and stimulation of caspase-3-like protease activity in various lepidopteran cell lines, but not in the dipteran cell line D. melanogaster S2. The apoptosis and the stimulation of caspase-3-like protease activity induced by Bm-Dronc overexpression were abrogated upon transfection with either a double-stranded RNA against bm-dronc or a plasmid expressing functional anti-apoptotic protein Hycu-IAP3 encoded by the baculovirus Hyphantria cunea multiple nucleopolyhedrovirus (MNPV). Apoptosis induction in BM-N cells by infection with a p35-defective Autographa californica MNPV or exposure to actinomycin D and UV promoted the cleavage of Bm-Dronc. These results indicate that Bm-Dronc serves as the initiator caspase responsible for the induction of caspase-dependent apoptosis.