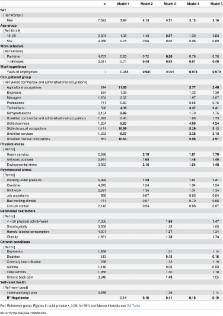 Unintentional injuries cause much of the global mortality burden, with the workplace being a common accident setting. Even in high-income economies, occupational injury figures remain remarkably high. Because risk factors for occupational injuries are prone to confounding, the present research takes a comprehensive approach. To better understand the occurrence of occupational injuries, sociodemographic factors and work- and health-related factors are tested simultaneously. Thus, the present analysis aims to develop a comprehensive epidemiological model that facilitates the explanation of varying injury rates in the workplace. The representative phone survey German Health Update 2010 provides information on medically treated occupational injuries sustained in the year prior to the interview. Data were collected on sociodemographics, occupation, working conditions, health-related behaviors, and chronic diseases. For the economically active population (18–70 years, n = 14,041), the 12-month prevalence of occupational injuries was calculated with a 95% confidence interval (CI). Blockwise multiple logistic regression was applied to successively include different groups of variables. Overall, 2.8% (95% CI 2.4–3.2) of the gainfully employed population report at least one occupational injury (women: 0.9%; 95% CI 0.7–1.2; men: 4.3%; 95% CI 3.7–5.0). In the fully adjusted model, male gender (OR 3.16) and age 18–29 (OR 1.54), as well as agricultural (OR 5.40), technical (OR 3.41), skilled service (OR 4.24) or manual (OR 5.12), and unskilled service (OR 3.13) or manual (OR 4.97) occupations are associated with higher chances of occupational injuries. The same holds for frequent stressors such as heavy carrying (OR 1.78), working in awkward postures (OR 1.46), environmental stress (OR 1.48), and working under pressure (OR 1.41). Among health-related variables, physical inactivity (OR 1.47) and obesity (OR 1.73) present a significantly higher chance of occupational injuries. While the odds for most work-related factors were as expected, the associations for health-related factors such as smoking, drinking, and chronic diseases were rather weak. In part, this may be due to context-specific factors such as safety and workplace regulations in high-income countries like Germany. This assumption could guide further research, taking a multi-level approach to international comparisons.

M. Nathan Nair,  Michael Freeman,  Sherine E Gabriel … (2012)
Reliable and timely information on the leading causes of death in populations, and how these are changing, is a crucial input into health policy debates. In the Global Burden of Diseases, Injuries, and Risk Factors Study 2010 (GBD 2010), we aimed to estimate annual deaths for the world and 21 regions between 1980 and 2010 for 235 causes, with uncertainty intervals (UIs), separately by age and sex. We attempted to identify all available data on causes of death for 187 countries from 1980 to 2010 from vital registration, verbal autopsy, mortality surveillance, censuses, surveys, hospitals, police records, and mortuaries. We assessed data quality for completeness, diagnostic accuracy, missing data, stochastic variations, and probable causes of death. We applied six different modelling strategies to estimate cause-specific mortality trends depending on the strength of the data. For 133 causes and three special aggregates we used the Cause of Death Ensemble model (CODEm) approach, which uses four families of statistical models testing a large set of different models using different permutations of covariates. Model ensembles were developed from these component models. We assessed model performance with rigorous out-of-sample testing of prediction error and the validity of 95% UIs. For 13 causes with low observed numbers of deaths, we developed negative binomial models with plausible covariates. For 27 causes for which death is rare, we modelled the higher level cause in the cause hierarchy of the GBD 2010 and then allocated deaths across component causes proportionately, estimated from all available data in the database. For selected causes (African trypanosomiasis, congenital syphilis, whooping cough, measles, typhoid and parathyroid, leishmaniasis, acute hepatitis E, and HIV/AIDS), we used natural history models based on information on incidence, prevalence, and case-fatality. We separately estimated cause fractions by aetiology for diarrhoea, lower respiratory infections, and meningitis, as well as disaggregations by subcause for chronic kidney disease, maternal disorders, cirrhosis, and liver cancer. For deaths due to collective violence and natural disasters, we used mortality shock regressions. For every cause, we estimated 95% UIs that captured both parameter estimation uncertainty and uncertainty due to model specification where CODEm was used. We constrained cause-specific fractions within every age-sex group to sum to total mortality based on draws from the uncertainty distributions. In 2010, there were 52·8 million deaths globally. At the most aggregate level, communicable, maternal, neonatal, and nutritional causes were 24·9% of deaths worldwide in 2010, down from 15·9 million (34·1%) of 46·5 million in 1990. This decrease was largely due to decreases in mortality from diarrhoeal disease (from 2·5 to 1·4 million), lower respiratory infections (from 3·4 to 2·8 million), neonatal disorders (from 3·1 to 2·2 million), measles (from 0·63 to 0·13 million), and tetanus (from 0·27 to 0·06 million). Deaths from HIV/AIDS increased from 0·30 million in 1990 to 1·5 million in 2010, reaching a peak of 1·7 million in 2006. Malaria mortality also rose by an estimated 19·9% since 1990 to 1·17 million deaths in 2010. Tuberculosis killed 1·2 million people in 2010. Deaths from non-communicable diseases rose by just under 8 million between 1990 and 2010, accounting for two of every three deaths (34·5 million) worldwide by 2010. 8 million people died from cancer in 2010, 38% more than two decades ago; of these, 1·5 million (19%) were from trachea, bronchus, and lung cancer. Ischaemic heart disease and stroke collectively killed 12·9 million people in 2010, or one in four deaths worldwide, compared with one in five in 1990; 1·3 million deaths were due to diabetes, twice as many as in 1990. The fraction of global deaths due to injuries (5·1 million deaths) was marginally higher in 2010 (9·6%) compared with two decades earlier (8·8%). This was driven by a 46% rise in deaths worldwide due to road traffic accidents (1·3 million in 2010) and a rise in deaths from falls. Ischaemic heart disease, stroke, chronic obstructive pulmonary disease (COPD), lower respiratory infections, lung cancer, and HIV/AIDS were the leading causes of death in 2010. Ischaemic heart disease, lower respiratory infections, stroke, diarrhoeal disease, malaria, and HIV/AIDS were the leading causes of years of life lost due to premature mortality (YLLs) in 2010, similar to what was estimated for 1990, except for HIV/AIDS and preterm birth complications. YLLs from lower respiratory infections and diarrhoea decreased by 45-54% since 1990; ischaemic heart disease and stroke YLLs increased by 17-28%. Regional variations in leading causes of death were substantial. Communicable, maternal, neonatal, and nutritional causes still accounted for 76% of premature mortality in sub-Saharan Africa in 2010. Age standardised death rates from some key disorders rose (HIV/AIDS, Alzheimer's disease, diabetes mellitus, and chronic kidney disease in particular), but for most diseases, death rates fell in the past two decades; including major vascular diseases, COPD, most forms of cancer, liver cirrhosis, and maternal disorders. For other conditions, notably malaria, prostate cancer, and injuries, little change was noted. Population growth, increased average age of the world's population, and largely decreasing age-specific, sex-specific, and cause-specific death rates combine to drive a broad shift from communicable, maternal, neonatal, and nutritional causes towards non-communicable diseases. Nevertheless, communicable, maternal, neonatal, and nutritional causes remain the dominant causes of YLLs in sub-Saharan Africa. Overlaid on this general pattern of the epidemiological transition, marked regional variation exists in many causes, such as interpersonal violence, suicide, liver cancer, diabetes, cirrhosis, Chagas disease, African trypanosomiasis, melanoma, and others. Regional heterogeneity highlights the importance of sound epidemiological assessments of the causes of death on a regular basis. Bill & Melinda Gates Foundation. Copyright © 2012 Elsevier Ltd. All rights reserved.

K Bush,  D R Kivlahan,  S Fihn … (1998)
To evaluate the 3 alcohol consumption questions from the Alcohol Use Disorders Identification Test (AUDIT-C) as a brief screening test for heavy drinking and/or active alcohol abuse or dependence. Patients from 3 Veterans Affairs general medical clinics were mailed questionnaires. A random, weighted sample of Health History Questionnaire respondents, who had 5 or more drinks over the past year, were eligible for telephone interviews (N = 447). Heavy drinkers were oversampled 2:1. Patients were excluded if they could not be contacted by telephone, were too ill for interviews, or were female (n = 54). Areas under receiver operating characteristic curves (AUROCs) were used to compare mailed alcohol screening questionnaires (AUDIT-C and full AUDIT) with 3 comparison standards based on telephone interviews: (1) past year heavy drinking (>14 drinks/week or > or =5 drinks/ occasion); (2) active alcohol abuse or dependence according to the Diagnostic and Statistical Manual of Mental Disorders, Revised Third Edition, criteria; and (3) either. Of 393 eligible patients, 243 (62%) completed AUDIT-C and interviews. For detecting heavy drinking, AUDIT-C had a higher AUROC than the full AUDIT (0.891 vs 0.881; P = .03). Although the full AUDIT performed better than AUDIT-C for detecting active alcohol abuse or dependence (0.811 vs 0.786; P<.001), the 2 questionnaires performed similarly for detecting heavy drinking and/or active abuse or dependence (0.880 vs 0.881). Three questions about alcohol consumption (AUDIT-C) appear to be a practical, valid primary care screening test for heavy drinking and/or active alcohol abuse or dependence.

The global burden of unintentional injuries and an agenda for progress.

Corinne Peek-Asa,  Aruna Chandran,  Adnan A. Hyder (2009)
According to the World Health Organization, unintentional injuries were responsible for over 3.9 million deaths and over 138 million disability-adjusted life-years in 2004, with over 90% of those occurring in low- and middle-income countries (LMIC). This paper utilizes the year 2004 World Health Organization Global Burden of Disease Study estimates to illustrate the global and regional burden of unintentional injuries and injury rates, stratified by cause, region, age, and gender. The worldwide rate of unintentional injuries is 61 per 100,000 population per year. Overall, road traffic injuries make up the largest proportion of unintentional injury deaths (33%). When standardized per 100,000 population, the death rate is nearly double in LMIC versus high-income countries (65 vs. 35 per 100,000), and the rate of disability-adjusted life-years is more than triple in LMIC (2,398 vs. 774 per 100,000). This paper calls for more action around 5 core areas that need research investments and capacity development, particularly in LMIC: 1) improving injury data collection, 2) defining the epidemiology of unintentional injuries, 3) estimating the costs of injuries, 4) understanding public perceptions about injury causation, and 5) engaging with policy makers to improve injury prevention and control.

The health survey German Health Update 2010 is part of the Federal Health Monitoring (FHM) in Germany. The FHM is done by the Robert Koch Institute (RKI) on behalf of the Federal Ministry of Health. The ministry finances the RKI and gives substantial funds for the FHM. Three of the authors (AR LEK GV) are employees of the RKI. No one of the authors received specific funding for this work. The funders had no role in study design, data collection and analysis, decision to publish, or preparation of the manuscript.

Data Availability The 'Health Monitoring' Research Data Centre at the Robert Koch Institute (RKI) is accredited by the German Data Forum according to uniform and transparent standards ( http://www.ratswd.de/en/data-infrastructure/rdc). The GEDA 2010 data set (DOI 10.7797/27-200910-1-1-3) is freely accessible on application to interested scientists as de facto anonymized data for scientific secondary analysis. Access to the data is provided in the form of a public use file on CD-ROM. More detailed information on access, application forms and guidelines can be obtained from datennutzung@ 123456rki.de .
Link to data:
ScienceOpen disciplines: Uncategorized