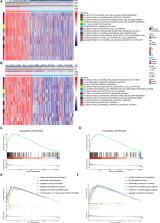 A total of 988 diffuse glioma samples were extracted from TCGA and CGGA databases. Consensus clustering was applied to reveal different subgroups of diffuse gliomas. Kaplan-Meier analysis was used to evaluate survival differences between groups. The infiltration of immune cells was estimated by ssGSEA, TIMER, and CIBERSORT algorithms. The construction of ARL signature was conducted using principal component analysis.

Consensus clustering revealed two clusters of diffuse gliomas, in which cluster 1 was associated with poor prognosis and enriched with malignant subtypes of gliomas. Moreover, cluster 1 exhibited high apoptotic and immune characteristics, and it had a low purity and high infiltration of several immune cells. The constructed ARL signature showed a promising accuracy in predicting the prognosis of glioma patients. ARL score was significantly elevated in the malignant subtype of glioma and the high ARL score indicated a poor prognosis. Besides, the high ARL score notably indicated low tumor purity and high infiltration of macrophages and neutrophils.

Our study developed and validated a novel ARL signature for the classification of diffuse glioma, which was closely associated with glioma immune microenvironment and could serve as a promising prognostic biomarker for glioma patients.

Sonja Hänzelmann,  Robert Castelo,  Justin Guinney (2013)
Background Gene set enrichment (GSE) analysis is a popular framework for condensing information from gene expression profiles into a pathway or signature summary. The strengths of this approach over single gene analysis include noise and dimension reduction, as well as greater biological interpretability. As molecular profiling experiments move beyond simple case-control studies, robust and flexible GSE methodologies are needed that can model pathway activity within highly heterogeneous data sets. Results To address this challenge, we introduce Gene Set Variation Analysis (GSVA), a GSE method that estimates variation of pathway activity over a sample population in an unsupervised manner. We demonstrate the robustness of GSVA in a comparison with current state of the art sample-wise enrichment methods. Further, we provide examples of its utility in differential pathway activity and survival analysis. Lastly, we show how GSVA works analogously with data from both microarray and RNA-seq experiments. Conclusions GSVA provides increased power to detect subtle pathway activity changes over a sample population in comparison to corresponding methods. While GSE methods are generally regarded as end points of a bioinformatic analysis, GSVA constitutes a starting point to build pathway-centric models of biology. Moreover, GSVA contributes to the current need of GSE methods for RNA-seq data. GSVA is an open source software package for R which forms part of the Bioconductor project and can be downloaded at http://www.bioconductor.org.