The catalytic role of a research university and international partnerships in building research capacity in Peru: A bibliometric analysis 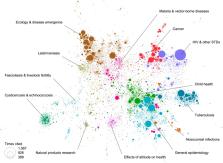 In Peru, the past three decades have witnessed impressive growth in biomedical research catalyzed from a single research university and its investigators who secured international partnerships and funding. We conducted a bibliometric analysis of publications by Peruvian authors to understand the roots of this growth and the spread of research networks within the country.

For 1997–2016, publications from Web of Science with at least one author affiliated with a Peruvian institution were examined by year, author affiliations, funding agencies, co-authorship linkages, and research topics.

From 1997–2016, the annual number of publications from Peru increased 9-fold from 75 to 672 totaling 6032. Of these, 56% of the articles had co-authors from the US, 13% from the UK, 12% from Brazil, and 10% from Spain. Universidad Peruana Cayetano Heredia (UPCH) was clearly the lead research institution noted on one-third of publications. Of the 20 most published authors, 15 were Peruvians, 14 trained at some point at UPCH, and 13 received advanced training abroad. Plotting co-authorships documented the growth of institutional collaborations, the robust links between investigators and some lineages of mentorship.

This analysis suggests that international training of Peruvian physician-scientists who built and sustained longstanding international partnerships with funding accelerated quality research on diseases of local importance. The role of a single research university, UPCH, was critical to advance a culture of biomedical research. Increased funding from the Peruvian Government and its Council for Science, Technology and Innovation will be needed to sustain this growth in the future. Middle-income countries might consider the Peruvian experience where long-term research and training partnerships yielded impressive advances to address key health priorities of the country.

One measure of a country’s productivity in biomedical research is through an analysis of the publications in the peer reviewed literature. We have searched the Web of Science database of English language biomedical publications with a Peruvian author to examine the growth in the number of publications over the period 1997–2016, the most productive research institutions in the country, the distribution of foreign coauthors, and the diversity of topics of research. In the past 2 decades, the number of publications has increased 9-fold with the extensive engagement with foreign co-authors and funding, a growing diversity of topics expanding from infectious diseases to the NCDs, and with one third of all publications coming from a single research university. The early overseas training of a group of young Peruvian physician-scientists in the 1960s led them to establish a unique research university, Universidad Peruano Cayetano Heredia that seeded this new direction and engagement in research, and the seeding of researchers to other institutions in the country working on specific research challenges. The Peruvian experience provides a model for other countries seeking to expand their footprint in research while laying out the need for greater investment by the government to secure and expand these gains while retaining outstanding scientists who have been able to identify through research new ways to address the nation’s priority problems in health. The use of bibliometric analyses can provide important insights in the growth of biomedical research in a country providing policy makers with evidence for making decisions on the future funding of research.

The scientific impact of nations.

Flavio Alcantara,  Dae-Hyun Kim,  Jennifer Furin … (2003)
Despite the prevalence of multidrug-resistant tuberculosis in nearly all low-income countries surveyed, effective therapy has been deemed too expensive and considered not to be feasible outside referral centers. We evaluated the results of community-based therapy for multidrug-resistant tuberculosis in a poor section of Lima, Peru. We describe the first 75 patients to receive ambulatory treatment with individualized regimens for chronic multidrug-resistant tuberculosis in northern Lima. We conducted a retrospective review of the charts of all patients enrolled in the program between August 1, 1996, and February 1, 1999, and identified predictors of poor outcomes. The infecting strains of Mycobacterium tuberculosis were resistant to a median of six drugs. Among the 66 patients who completed four or more months of therapy, 83 percent (55) were probably cured at the completion of treatment. Five of these 66 patients (8 percent) died while receiving therapy. Only one patient continued to have positive cultures after six months of treatment. All patients in whom treatment failed or who died had extensive bilateral pulmonary disease. In a multiple Cox proportional-hazards regression model, the predictors of the time to treatment failure or death were a low hematocrit (hazard ratio, 4.09; 95 percent confidence interval, 1.35 to 12.36) and a low body-mass index (hazard ratio, 3.23; 95 percent confidence interval, 0.90 to 11.53). Inclusion of pyrazinamide and ethambutol in the regimen (when susceptibility was confirmed) was associated with a favorable outcome (hazard ratio for treatment failure or death, 0.30; 95 percent confidence interval, 0.11 to 0.83). Community-based outpatient treatment of multidrug-resistant tuberculosis can yield high cure rates even in resource-poor settings. Early initiation of appropriate therapy can preserve susceptibility to first-line drugs and improve treatment outcomes. Copyright 2003 Massachusetts Medical Society

O Del Maschio,  ,  Marcio Garcia (2005)
Neurocysticercosis, the infection of the human brain by the larvae of Taenia solium, is a major cause of acquired epilepsy in most low-income countries. Cases of neurocysticercosis are becoming more common in high-income countries because of increased migration and travel. Diagnosis by neuroimaging and serological assessment has greatly improved over the past decade, and the natural progression of the disease and response to antiparasitic drugs is now much better understood. Neurocysticercosis is potentially eradicable, and control interventions are underway to eliminate this infection. Meanwhile, updated information on diagnosis and management of neurocysticercosis is required, especially for clinicians who are unfamiliar with its wide array of clinical presentations.

This is an open access article, free of all copyright, and may be freely reproduced, distributed, transmitted, modified, built upon, or otherwise used by anyone for any lawful purpose. The work is made available under the Creative Commons CC0 public domain dedication.

PLOS Publication Stage vor-update-to-uncorrected-proof
Publication Update 2019-07-25
Data Availability All data reported in this manuscript are available from the Web of Science article database and can be retrieved by using the advanced search string: CU=Peru AND PY=1997-2016 AND PMID=(1* OR 2* OR 3* OR 4* OR 5* OR 6* OR 7* OR 8* OR 9*) NOT DT=(meeting abstract) NOT WC=(physics*). Note that the data cannot be made fully available as access to Web of Science requires a paid license agreement with an individual or an institution with which an individual is affiliated.
Data availability:
ScienceOpen disciplines: Infectious disease & Microbiology