Urinary sampling for 5HIAA and metanephrines determination: revisiting the recommendations 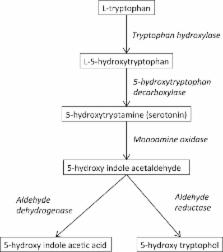 Biogenic amines such as 5-hydroxy-indole acetic acid (5HIAA) the main metabolite of serotonin or metanephrines (catecholamines metabolites) are used as biomarkers of neuroendocrine tumours.

To re-evaluate the recommendations for urinary sampling (preservatives, diet, drugs, etc.) as many of the reported analytical interferences supporting these recommendations are related to obsolete assays.

5HIAA may degrade as soon as urine is excreted. Thus, acids as preservatives (hydrochloric or acetic acid) have to be immediately added. Care should be taken not to decrease the pH under 2. Urine preservative for metanephrine assays is not mandatory. Diets including serotonin-, tryptophan- and dopamine-rich foods have to be avoided depending on the biomarkers investigated (bananas, plantain, nuts, etc.). Tryptophan-rich over-the-counter formulas have to be prohibited when 5HIAA has to be assayed. Acetaminophen may interfere with electrochemical detection depending on high-pressure liquid chromatography (HPLC) parameters. No interference is known with mass spectrometric assays but with the one described for metanephrines determination. Some drugs interfere however with serotonin and catecholamines secretion and/or metabolism (monoamine oxidase inhibitors, serotonin or dopamine recapture inhibitors, etc.).

Revisited recommendations are provided for the diet, the drugs and the preservatives before HPLC coupled with electrochemical and mass spectrometry assays.

The expanded biology of serotonin.

B Roth,  Miles Berger,  J. Gray (2008)
Serotonin is perhaps best known as a neurotransmitter that modulates neural activity and a wide range of neuropsychological processes, and drugs that target serotonin receptors are used widely in psychiatry and neurology. However, most serotonin is found outside the central nervous system, and virtually all of the 15 serotonin receptors are expressed outside as well as within the brain. Serotonin regulates numerous biological processes including cardiovascular function, bowel motility, ejaculatory latency, and bladder control. Additionally, new work suggests that serotonin may regulate some processes, including platelet aggregation, by receptor-independent, transglutaminase-dependent covalent linkage to cellular proteins. We review this new "expanded serotonin biology" and discuss how drugs targeting specific serotonin receptors are beginning to help treat a wide range of diseases.

Jan Tack,  Paul Gershon (2006)
Serotonin is an important gastrointestinal signaling molecule. It is a paracrine messenger utilized by enterochromaffin (EC) cells, which function as sensory transducers. Serotonin activates intrinsic and extrinsic primary afferent neurons to, respectively, initiate peristaltic and secretory reflexes and to transmit information to the central nervous system. Serotonin is also a neurotransmitter utilized by a system of long descending myenteric interneurons. Serotonin is synthesized through the actions of 2 different tryptophan hydroxylases, TpH1 and TpH2, which are found, respectively, in EC cells and neurons. Serotonin is inactivated by the serotonin reuptake transporter (SERT)-mediated uptake into enterocytes or neurons. The presence of many serotonin receptor subtypes enables selective drugs to be designed to therapeutically modulate gastrointestinal motility, secretion, and sensation. Current examples include tegaserod, a 5-HT(4) partial agonist, which has been approved for treatment of irritable bowel syndrome (IBS) with constipation in women and for chronic constipation in men and women. The 5-HT(3) antagonists, granisetron and ondansetron, are useful in combating the nausea associated with cancer chemotherapy, and alosetron is employed in the treatment of IBS with diarrhea. Serotonergic signaling abnormalities have also been putatively implicated in the pathogenesis of functional bowel diseases. Other compounds, for which efficacy has not been rigorously established, but which may have value, include tricyclic antidepressants and serotonin selective reuptake inhibitors to combat IBS, and 5-HT(1) agonists, which enhance gastric accommodation, to treat functional dyspepsia. The initial success encountered with serotonergic agents holds promise for newer and more potent insights and therapies of brain-gut disorders.

Catecholamine metabolism: a contemporary view with implications for physiology and medicine.

Bernard Goldstein,  Graeme Eisenhofer,  I Kopin (2004)
This article provides an update about catecholamine metabolism, with emphasis on correcting common misconceptions relevant to catecholamine systems in health and disease. Importantly, most metabolism of catecholamines takes place within the same cells where the amines are synthesized. This mainly occurs secondary to leakage of catecholamines from vesicular stores into the cytoplasm. These stores exist in a highly dynamic equilibrium, with passive outward leakage counterbalanced by inward active transport controlled by vesicular monoamine transporters. In catecholaminergic neurons, the presence of monoamine oxidase leads to formation of reactive catecholaldehydes. Production of these toxic aldehydes depends on the dynamics of vesicular-axoplasmic monoamine exchange and enzyme-catalyzed conversion to nontoxic acids or alcohols. In sympathetic nerves, the aldehyde produced from norepinephrine is converted to 3,4-dihydroxyphenylglycol, not 3,4-dihydroxymandelic acid. Subsequent extraneuronal O-methylation consequently leads to production of 3-methoxy-4-hydroxyphenylglycol, not vanillylmandelic acid. Vanillylmandelic acid is instead formed in the liver by oxidation of 3-methoxy-4-hydroxyphenylglycol catalyzed by alcohol and aldehyde dehydrogenases. Compared to intraneuronal deamination, extraneuronal O-methylation of norepinephrine and epinephrine to metanephrines represent minor pathways of metabolism. The single largest source of metanephrines is the adrenal medulla. Similarly, pheochromocytoma tumor cells produce large amounts of metanephrines from catecholamines leaking from stores. Thus, these metabolites are particularly useful for detecting pheochromocytomas. The large contribution of intraneuronal deamination to catecholamine turnover, and dependence of this on the vesicular-axoplasmic monoamine exchange process, helps explain how synthesis, release, metabolism, turnover, and stores of catecholamines are regulated in a coordinated fashion during stress and in disease states.