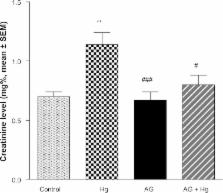 The effects of Arabic gum (AG) against nephrotoxicity of mercury (Hg), an oxidative-stress inducing substance, in rats were investigated. A single dose of mercuric chloride (5 mg/kg intraperitoneal injection) induced renal toxicity, manifested biochemically by a significant increase in serum creatinine, blood urea nitrogen, thiobarbituric acid reactive substances, and total nitrate/nitrite production in kidney tissues. In addition, reduced glutathione, glutathione peroxidase, and catalase enzymes in renal tissues were significantly decreased. Pretreatment of rats with AG (7.5 g/kg/day per oral administration), starting 5 days before mercuric chloride injection and continuing through the experimental period, resulted in a complete reversal of Hg-induced increase in creatinine, blood urea nitrogen, thiobarbituric acid reactive substances, and total nitrate/nitrite to control values. Histopathologic examination of kidney tissues confirmed the biochemical data; pretreatment of AG prevented Hg-induced degenerative changes of kidney tissues. These results indicate that AG is an efficient cytoprotective agent against Hg-induced nephrotoxicity by a mechanism related at least in part to its ability to decrease oxidative and nitrosative stress and preserve the activity of antioxidant enzymes in kidney tissues.

S Rizwi,  S Haq,  F I Zahir … (2005)
Post Minamata incident there has been awareness about mercury toxicity even among the general public. Previous researches contributed a vast amount of data regarding acute mercury exposure, but gradually information about the low dose [Ninomiya, T., Ohmori, H., Hashimoto, K., Tsuruta, K., Ekino, S., 1995. Expansion of methylmercury poisoning outside minamata: an epidemiological study on chronic methylmercury poisoninig outside of Minamata. Environ. Res. 70 (1) 47-50; Lebel, J., Mergler, D., Lucotte, M., Amorim, M., Dolbec, J., Miranda, D., Arantes, G., Rheault, I., Pichet, P., 1996. Evidence of early nervous system dysfunction in Amazonian populations exposed to low-levels of methylmercury. Neurotoxicology 17 (1) 157-167] of mercury toxicity has been trickling in. With mercury contaminating rain-, ground- and sea-water no one is safe. Polluted water leads to mercury laced fish, meat and vegetable. In aquatic environments, inorganic mercury is microbiologically transformed into lipophilic organic compound 'methylmercury'. This transformation makes mercury more prone to biomagnification in food chains. Consequently, populations with traditionally high dietary intake of food originating from fresh or marine environment have highest dietary exposure to mercury. Extensive research done on locals across the globe have already established this, persons who routinely consume fish or a particular species of fish are at an increased risk of methylmercury poisoning. The easy access of the toxicant to man through multiple pathways air, water, food, cosmetic products and even vaccines increase the exposure. Foetus and children are more susceptible towards mercury toxicity. Mothers consuming diet containing mercury pass the toxicant to foetus and to infants through breast milk. Decreased performance in areas of motor function and memory has been reported among children exposed to presumably safe mercury levels. Similarly, disruption of attention, fine motor function and verbal memory was also found in adults on exposure to low mercury levels. It is an occupational hazard for dental staff, chloralkali factory workers and goldminers, etc. Mercury has been found to be a causative agent of various sorts of disorders, including neurological, nephrological, immunological, cardiac, motor, reproductive and even genetic. Recently heavy metal mediated toxicity has been linked to diseases like Alzeihemer's, Parkinson's, Autism, Lupus, Amyotrophic lateral sclerosis, etc. Besides this, it poses danger to wildlife. Therefore, it becomes imperative to spread the information regarding the threat of mercury exposure amongst the scientists and masses.

The toxicology of mercury.

T W Clarkson (1996)
The major physical forms of mercury to which humans are exposed are mercury vapor, Hg0, and methylmercury compounds, Ch3HgX. Mercury vapor emitted from both natural and anthropogenic sources is globally distributed in the atmosphere. It is returned as a water-soluble form in precipitation and finds its way into bodies of fresh and ocean water. Land run-off also accounts for further input into lakes and oceans. Inorganic mercury, present in water sediments, is subject to bacterial conversion to methylmercury compounds that are bioaccumulated in the aquatic food chain to reach the highest concentration in predatory fish. Human exposure to mercury vapor is from dental amalgam and industries using mercury. Methylmercury compounds are found exclusively in seafood and freshwater fish. The health effects of mercury vapor have been known since ancient times. Severe exposure results in a triad of symptoms, erethism, tremor, and gingivitis. Today, we are concerned with more subtle effects such as preclinical changes in kidney function and behavioral and cognitive changes associated with effects on the central nervous system. Methylmercury is a neurological poison affecting primarily brain tissue. In adults, brain damage is focal affecting the function of such areas as the cerebellum (ataxia) and the visual cortex (constricted visual fields). Methylmercury also at high doses can cause severe damage to the developing brain. Today the chief concern is with the more subtle effects arising from prenatal exposure such as delayed development and cognitive changes in children.

Molecular interactions with mercury in the kidney.

R K Zalups (2000)
Mercury is unique among the heavy metals in that it can exist in several physical and chemical forms, including elemental mercury, which is a liquid at room temperature. All forms of mercury have toxic effects in a number of organs, especially in the kidneys. Within the kidney, the pars recta of the proximal tubule is the most vulnerable segment of the nephron to the toxic effects of mercury. The biological and toxicological activity of mercurous and mercuric ions in the kidney can be defined largely by the molecular interactions that occur at critical nucleophilic sites in and around target cells. Because of the high bonding affinity between mercury and sulfur, there is particular interest in the interactions that occur between mercuric ions and the thiol group(s) of proteins, peptides and amino acids. Molecular interactions with sulfhydryl groups in molecules of albumin, metallothionein, glutathione, and cysteine have been implicated in mechanisms involved in the proximal tubular uptake, accumulation, transport, and toxicity of mercuric ions. In addition, the susceptibility of target cells in the kidneys to the injurious effects of mercury is modified by a number of intracellular and extracellular factors relating to several thiol-containing molecules. These very factors are the theoretical basis for most of the currently employed therapeutic strategies. This review provides an update on the current body of knowledge regarding the molecular interactions that occur between mercury and various thiol-containing molecules with respect to the mechanisms involved in the renal cellular uptake, accumulation, elimination, and toxicity of mercury.