Update: use of the benchmark dose approach in risk assessment 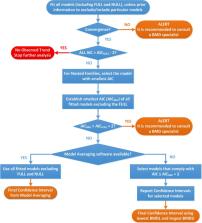 The Scientific Committee ( SC) reconfirms that the benchmark dose ( BMD) approach is a scientifically more advanced method compared to the NOAEL approach for deriving a Reference Point ( RP). Most of the modifications made to the SC guidance of 2009 concern the section providing guidance on how to apply the BMD approach. Model averaging is recommended as the preferred method for calculating the BMD confidence interval, while acknowledging that the respective tools are still under development and may not be easily accessible to all. Therefore, selecting or rejecting models is still considered as a suboptimal alternative. The set of default models to be used for BMD analysis has been reviewed, and the Akaike information criterion ( AIC) has been introduced instead of the log‐likelihood to characterise the goodness of fit of different mathematical models to a dose–response data set. A flowchart has also been inserted in this update to guide the reader step‐by‐step when performing a BMD analysis, as well as a chapter on the distributional part of dose–response models and a template for reporting a BMD analysis in a complete and transparent manner. Finally, it is recommended to always report the BMD confidence interval rather than the value of the BMD. The lower bound ( BMDL) is needed as a potential RP, and the upper bound ( BMDU) is needed for establishing the BMDU/ BMDL per ratio reflecting the uncertainty in the BMD estimate. This updated guidance does not call for a general re‐evaluation of previous assessments where the NOAEL approach or the BMD approach as described in the 2009 SC guidance was used, in particular when the exposure is clearly smaller (e.g. more than one order of magnitude) than the health‐based guidance value. Finally, the SC firmly reiterates to reconsider test guidelines given the expected wide application of the BMD approach.

K S Crump (1984)
The usual method for establishing allowable daily intake (ADI) for a chemical involves determining a no-observed-effect level (NOEL) and applying a safety factor. Even though this method has been used for many years, there appear to be no general guidelines or rules for defining a NOEL. The determination of a NOEL is particularly uncertain for lesions which occur naturally in untreated animals. NOELs also have shortcomings in that smaller experiments tend to give larger values (this should be reversed because larger experiments can provide greater evidence of safety) and that the steepness of the dose response in the dose range where effects occur plays little or no role in the determination of a NOEL. This paper proposes and illustrates the use of a "benchmark dose" (BD) as an alternative to a NOEL. A BD is a statistical lower confidence limit to a dose producing some predetermined increase in response rate such as 0.01 or 0.1. The BD is calculated using a mathematical dose-response model. This approach makes appropriate use of sample size and the shape of the dose-response curve. The BD normally will not depend strongly upon the mathematical model used because the method does not involve extrapolation far below the experimental range. Thus the method sidesteps much of the model dependency often associated with extrapolation of carcinogenicity data to low doses. The method can be applied to either "quantal" data in which only the presence or absence of an effect is recorded, or "continuous" data in which the severity of the effect is also noted.

An Implementation of Bayesian Adaptive Regression Splines (BARS) in C with S and R Wrappers.

Andrea Kass,  Thomas Liebner,  Garrick Wallstrom (2008)
BARS (DiMatteo, Genovese, and Kass 2001) uses the powerful reversible-jump MCMC engine to perform spline-based generalized nonparametric regression. It has been shown to work well in terms of having small mean-squared error in many examples (smaller than known competitors), as well as producing visually-appealing fits that are smooth (filtering out high-frequency noise) while adapting to sudden changes (retaining high-frequency signal). However, BARS is computationally intensive. The original implementation in S was too slow to be practical in certain situations, and was found to handle some data sets incorrectly. We have implemented BARS in C for the normal and Poisson cases, the latter being important in neurophysiological and other point-process applications. The C implementation includes all needed subroutines for fitting Poisson regression, manipulating B-splines (using code created by Bates and Venables), and finding starting values for Poisson regression (using code for density estimation created by Kooperberg). The code utilizes only freely-available external libraries (LAPACK and BLAS) and is otherwise self-contained. We have also provided wrappers so that BARS can be used easily within S or R.

This is an open access article under the terms of the http://creativecommons.org/licenses/by-nd/4.0/ License, which permits use and distribution in any medium, provided the original work is properly cited and no modifications or adaptations are made.