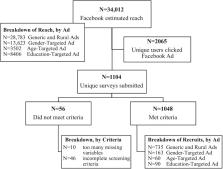 Facebook has shown promise as an economical means of recruiting participants for health research. However, few studies have evaluated this recruitment method in Canada, fewer still targeting older adults, and, to our knowledge, none specifically in Newfoundland and Labrador (NL).

This study aimed to assess Facebook advertising as an economical means of recruiting a representative sample of adults aged 35 to 74 years in NL for a cross-sectional health survey.

Facebook advertising was used to recruit for a Web-based survey on cancer awareness and prevention during April and May 2018; during recruitment, additional advertisements were targeted to increase representation of demographics that we identified as being underrepresented in our sample. Sociodemographic and health characteristics of the study sample were compared with distributions of the underlying population to determine representativeness. Cramer V indicates the magnitude of the difference between the sample and population distributions, interpreted as small (Cramer V=0.10), medium (0.30), and large (0.50). Sample characteristics were considered representative if there was no statistically significant difference in distributions (chi-square P>.01) or if the difference was small (V≤0.10), and practically representative if 0.10<V≤0.20. The cost per recruit of Facebook advertising was compared with a quote for a random digit dialing (RDD)–recruited postal survey to determine if this method was economical.

Facebook advertising offers an easy, rapid, and economical means to recruit a partially representative (representative or practically representative of 8 of the 13 characteristics studied) sample of middle-aged and older adults for health survey research. As Facebook uses a nonrandom targeting algorithm, caution is warranted in its applications for certain types of research.

Non-response and related factors in a nation-wide health survey.

P Rautava,  M. Koskenvuo,  J Ahvenainen … (2000)
To analyse selective factors associated with an unexpectedly low response rate. The baseline questionnaire survey of a large prospective follow-up study on the psychosocial health of the Finnish working-aged randomly chosen population resulted in 21,101 responses (40.0%) in 1998. The non-respondent analysis used demographic and health-related population characteristics from the official statistics and behavioural, physical and mental health-related outcome differences between early and late respondents to predict possible non-response bias. Reasons for non-response, indicated by missing responses of late respondents, and factors affecting the giving of consent were also analysed. The probability of not responding was greater for men, older age groups, those with less education, divorced and widowed respondents, and respondents on disability pension. The physical health-related differences between the respondents and the general population were small and could be explained by differences in definitions. The late respondents smoked and used more psychopharmaceutical drugs than the early ones, suggesting similar features in non-respondents. The sensitive issues had a small effect on the response rate. The consent to use a medical register-based follow-up was obtained from 94.5% of the early and 90.9% of the late respondents (odds ratio: 1.70; 95% confidence interval: 1.49-1.93). Consent was more likely among respondents reporting current smoking, heavy alcohol use, panic disorder or use of tranquillisers. The main reasons for non-response may be the predisposing sociodemographic and behavioural factors, the length and sensitive nature of the questionnaire to some extent, and a suspicion of written consent and a connection being made between the individual and the registers mentioned on the consent form.

Louise Thornton,  Philip Batterham,  Daniel Fassnacht … (2016)
Recruiting participants is a challenge for many health, medical and psychosocial research projects. One tool more frequently being used to improve recruitment is the social networking website Facebook. A systematic review was conducted to identify studies that have used Facebook to recruit participants of all ages, to any psychosocial, health or medical research. 110 unique studies that used Facebook as a recruitment source were included in the review. The majority of studies used a cross-sectional design (80%) and addressed a physical health or disease issue (57%). Half (49%) of the included studies reported specific details of the Facebook recruitment process. Researchers paid between $1.36 and $110 per completing participants (Mean = $17.48, SD = $23.06). Among studies that examined the representativeness of their sample, the majority concluded (86%) their Facebook-recruited samples were similarly representative of samples recruited via traditional methods. These results indicate that Facebook is an effective and cost-efficient recruitment method. Researchers should consider their target group, advertisement wording, offering incentives and no-cost methods of recruitment when considering Facebook as a recruitment source. It is hoped this review will assist researchers to make decisions regarding the use of Facebook as a recruitment tool in future research.

This is an open-access article distributed under the terms of the Creative Commons Attribution License ( https://creativecommons.org/licenses/by/4.0/), which permits unrestricted use, distribution, and reproduction in any medium, provided the original work, first published in the Journal of Medical Internet Research, is properly cited. The complete bibliographic information, a link to the original publication on http://www.jmir.org/.as well as this copyright and license information must be included.