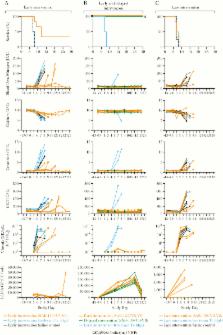 Journal: The Journal of Infectious Diseases

Xiangguo Qiu,  Gary Wong,  Jonathan Audet … (2014)
Without an approved vaccine or treatment, Ebola outbreak management has been limited to palliative care and barrier methods to prevent transmission. These approaches, however, have yet to end the 2014 outbreak of Ebola after its prolonged presence in West Africa. Here we show that a combination of monoclonal antibodies (ZMapp™), optimized from two previous antibody cocktails, is able to rescue 100% of rhesus macaques when treatment is initiated up to 5 days post-challenge. High fever, viremia, and abnormalities in blood count and chemistry were evident in many animals before ZMapp™ intervention. Advanced disease, as indicated by elevated liver enzymes, mucosal hemorrhages and generalized petechia could be reversed, leading to full recovery. ELISA and neutralizing antibody assays indicate that ZMapp™ is cross-reactive with the Guinean variant of Ebola. ZMapp™ currently exceeds all previous descriptions of efficacy with other therapeutics, and results warrant further development of this cocktail for clinical use.

The Effectiveness of Convalescent Plasma and Hyperimmune Immunoglobulin for the Treatment of Severe Acute Respiratory Infections of Viral Etiology: A Systematic Review and Exploratory Meta-analysis

John Mair-Jenkins,  Maria Saavedra-Campos,  J Baillie … (2014)
Background.  Administration of convalescent plasma, serum, or hyperimmune immunoglobulin may be of clinical benefit for treatment of severe acute respiratory infections (SARIs) of viral etiology. We conducted a systematic review and exploratory meta-analysis to assess the overall evidence. Methods.  Healthcare databases and sources of grey literature were searched in July 2013. All records were screened against the protocol eligibility criteria, using a 3-stage process. Data extraction and risk of bias assessments were undertaken. Results.  We identified 32 studies of SARS coronavirus infection and severe influenza. Narrative analyses revealed consistent evidence for a reduction in mortality, especially when convalescent plasma is administered early after symptom onset. Exploratory post hoc meta-analysis showed a statistically significant reduction in the pooled odds of mortality following treatment, compared with placebo or no therapy (odds ratio, 0.25; 95% confidence interval, .14–.45; I2 = 0%). Studies were commonly of low or very low quality, lacked control groups, and at moderate or high risk of bias. Sources of clinical and methodological heterogeneity were identified. Conclusions.  Convalescent plasma may reduce mortality and appears safe. This therapy should be studied within the context of a well-designed clinical trial or other formal evaluation, including for treatment of Middle East respiratory syndrome coronavirus CoV infection.

Thomas Luke,  Edward Kilbane,  Jeffrey L Jackson … (2006)
Studies from the Spanish influenza era reported that transfusion of influenza-convalescent human blood products reduced mortality in patients with influenza complicated by pneumonia. Treatments for H5N1 influenza are unsatisfactory, and convalescent human plasma containing H5N1 antibodies could be an effective therapy during outbreaks and pandemics. To determine whether transfusion with influenza-convalescent human blood products reduced the risk for death in patients with Spanish influenza pneumonia. Manual search of English-language journals from 1918 to 1925. Citations from retrieved studies were also searched. Published English-language studies that had at least 10 patients in the treatment group, used convalescent blood products to treat Spanish influenza pneumonia in a hospital setting, and reported on a control or comparison group. Two investigators independently extracted data on study characteristics, outcomes, adverse events, and quality. Eight relevant studies involving 1703 patients were found. Treated patients, who were often selected because of more severe illness, were compared with untreated controls with influenza pneumonia in the same hospital or ward. The overall crude case-fatality rate was 16% (54 of 336) among treated patients and 37% (452 of 1219) among controls. The range of absolute risk differences in mortality between the treatment and control groups was 8% to 26% (pooled risk difference, 21% [95% CI, 15% to 27%]). The overall crude case-fatality rate was 19% (28 of 148) among patients who received early treatment (after or =4 days of pneumonia complications). The range of absolute risk differences in mortality between the early treatment group and the late treatment group was 26% to 50% (pooled risk difference, 41% [CI, 29% to 54%]). Adverse effects included chill reactions and possible exacerbations of symptoms in a few patients. Studies were few and had many methodologic limitations. No study was a blinded, randomized, or placebo-controlled trial. Some pertinent studies may have been missed. Patients with Spanish influenza pneumonia who received influenza-convalescent human blood products may have experienced a clinically important reduction in the risk for death. Convalescent human H5N1 plasma could be an effective, timely, and widely available treatment that should be studied in clinical trials.

This is an Open Access article distributed under the terms of the Creative Commons Attribution-NonCommercial-NoDerivs licence ( http://creativecommons.org/licenses/by-nc-nd/4.0/), which permits non-commercial reproduction and distribution of the work, in any medium, provided the original work is not altered or transformed in any way, and that the work is properly cited. For commercial re-use, please contact journals.permissions@oup.com