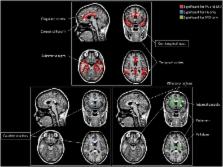 Neuroimaging studies help us better understand the pathophysiology and symptoms of Parkinson's disease (PD). In several of these studies, diffusion tensor imaging (DTI) was used to investigate structural changes in cerebral tissue. Although data have been provided as regards to specific brain areas, a whole brain meta-analysis is still missing.

Our results showed that FA-D ES and MD-D ES were able to distinguish between patients and healthy controls. Significant differences, indicating degenerations, were observed within the substantia nigra, the corpus callosum, and the cingulate and temporal cortices. Moreover, some findings (particularly in the corticospinal tract) suggested opposite brain changes associated with PD. In addition, our results demonstrated that MD-D ES was particularly sensitive to clinical and MRI parameters, such as the number of DTI directions and the echo time within white matter.

Despite some limitations, DTI appears as a sensitive method to study PD pathophysiology and severity. The association of DTI with other MRI methods should also be considered and could benefit the study of brain degenerations in PD.

Principles of diffusion tensor imaging and its applications to basic neuroscience research.

Susumu Mori,  Jiangyang Zhang (2006)
The brain contains more than 100 billion neurons that communicate with each other via axons for the formation of complex neural networks. The structural mapping of such networks during health and disease states is essential for understanding brain function. However, our understanding of brain structural connectivity is surprisingly limited, due in part to the lack of noninvasive methodologies to study axonal anatomy. Diffusion tensor imaging (DTI) is a recently developed MRI technique that can measure macroscopic axonal organization in nervous system tissues. In this article, the principles of DTI methodologies are explained, and several applications introduced, including visualization of axonal tracts in myelin and axonal injuries as well as human brain and mouse embryonic development. The strengths and limitations of DTI and key areas for future research and development are also discussed.

C Hawkes,  K Del Tredici,  H Braak (2007)
Accumulating evidence suggests that sporadic Parkinson's disease has a long prodromal period during which several non‐motor features develop, in particular, impairment of olfaction, vagal dysfunction and sleep disorder. Early sites of Lewy pathology are the olfactory bulb and enteric plexus of the stomach. We propose that a neurotropic pathogen, probably viral, enters the brain via two routes: (i) nasal, with anterograde progression into the temporal lobe; and (ii) gastric, secondary to swallowing of nasal secretions in saliva. These secretions might contain a neurotropic pathogen that, after penetration of the epithelial lining, could enter axons of the Meissner's plexus and, via transsynaptic transmission, reach the preganglionic parasympathetic motor neurones of the vagus nerve. This would allow retrograde transport into the medulla and, from here, into the pons and midbrain until the substantia nigra is reached and typical aspects of disease commence. Evidence for this theory from the perspective of olfactory and autonomic dysfunction is reviewed, and the possible routes of pathogenic invasion are considered. It is concluded that the most parsimonious explanation for the initial events of sporadic Parkinson's disease is pathogenic access to the brain through the stomach and nose – hence the term ‘dual‐hit’.

E Akbudak,  R McKinstry,  J Shimony … (1999)
Functional imaging with positron emission tomography and functional MRI has revolutionized studies of the human brain. Understanding the organization of brain systems, especially those used for cognition, remains limited, however, because no methods currently exist for noninvasive tracking of neuronal connections between functional regions [Crick, F. & Jones, E. (1993) Nature (London) 361, 109-110]. Detailed connectivities have been studied in animals through invasive tracer techniques, but these invasive studies cannot be done in humans, and animal results cannot always be extrapolated to human systems. We have developed noninvasive neuronal fiber tracking for use in living humans, utilizing the unique ability of MRI to characterize water diffusion. We reconstructed fiber trajectories throughout the brain by tracking the direction of fastest diffusion (the fiber direction) from a grid of seed points, and then selected tracks that join anatomically or functionally (functional MRI) defined regions. We demonstrate diffusion tracking of fiber bundles in a variety of white matter classes with examples in the corpus callosum, geniculo-calcarine, and subcortical association pathways. Tracks covered long distances, navigated through divergences and tight curves, and manifested topological separations in the geniculo-calcarine tract consistent with tracer studies in animals and retinotopy studies in humans. Additionally, previously undescribed topologies were revealed in the other pathways. This approach enhances the power of modern imaging by enabling study of fiber connections among anatomically and functionally defined brain regions in individual human subjects.