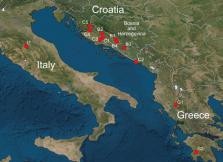 Approaches using microsatellite markers are considered the gold standard for modern population genetic studies. However, although they have found application in research into various platyhelminth taxa, they remained substantially underutilized in the study of monogeneans. In the present study, a newly developed set of 24 microsatellite markers was used to investigate the genetic diversity of the generalist monogenean species Dactylogyrus vistulae. The analyzed parasite specimens were collected from 13 cyprinoid species from 11 sites in the Apennine and Balkan peninsulas. A total of 159 specimens were genotyped at each of the loci and the number of alleles per locus ranged from 2 to 16, with a mean number of 6.958 alleles per locus. Exceptionally high genetic diversity was observed among D. vistulae individuals in the southern Balkans (mean N A per locus = 3.917), suggesting that generalist D. vistulae expanded from the south to the north in the Balkans and later into central Europe. The initial clustering analysis divided all investigated specimens into three major clusters; however, the results of the subsequent analyses revealed the existence of various subpopulations, suggesting that the population structure of D. vistulae is associated with the diversification of their cyprinoid hosts. In addition, the partition of the parasite population was observed in regions of the sympatric occurrence of two host species, indicating that these hosts may represent a barrier for gene flow, even for generalist parasite species.

The application of a newly developed set of 24 microsatellite markers revealed a strong genetic structure among generalist monogenean parasites. The initial clustering analysis divided all investigated specimens into three major clusters; however, the results of the subsequent analyses revealed the existence of various subpopulations, suggesting that the population structure of D. vistulae is associated with the diversification of their cyprinoid hosts. In addition, a partition of the parasite population was observed in regions of the sympatric occurrence of two host species, indicating that these hosts may represent a barrier to gene flow, even for generalist parasite species.

Detecting the number of clusters of individuals using the software structure: a simulation study

G Evanno, S. Regnaut, J Goudet (2005)
The identification of genetically homogeneous groups of individuals is a long standing issue in population genetics. A recent Bayesian algorithm implemented in the software STRUCTURE allows the identification of such groups. However, the ability of this algorithm to detect the true number of clusters (K) in a sample of individuals when patterns of dispersal among populations are not homogeneous has not been tested. The goal of this study is to carry out such tests, using various dispersal scenarios from data generated with an individual-based model. We found that in most cases the estimated 'log probability of data' does not provide a correct estimation of the number of clusters, K. However, using an ad hoc statistic DeltaK based on the rate of change in the log probability of data between successive K values, we found that STRUCTURE accurately detects the uppermost hierarchical level of structure for the scenarios we tested. As might be expected, the results are sensitive to the type of genetic marker used (AFLP vs. microsatellite), the number of loci scored, the number of populations sampled, and the number of individuals typed in each sample.

Jonathan Pritchard, Matthew Stephens, Peter Donnelly … (2000)
We describe a model-based clustering method for using multilocus genotype data to infer population structure and assign individuals to populations. We assume a model in which there are K populations (where K may be unknown), each of which is characterized by a set of allele frequencies at each locus. Individuals in the sample are assigned (probabilistically) to populations, or jointly to two or more populations if their genotypes indicate that they are admixed. Our model does not assume a particular mutation process, and it can be applied to most of the commonly used genetic markers, provided that they are not closely linked. Applications of our method include demonstrating the presence of population structure, assigning individuals to populations, studying hybrid zones, and identifying migrants and admixed individuals. We show that the method can produce highly accurate assignments using modest numbers of loci—e.g., seven microsatellite loci in an example using genotype data from an endangered bird species. The software used for this article is available from http://www.stats.ox.ac.uk/~pritch/home.html.

STRUCTURE HARVESTER: a website and program for visualizing STRUCTURE output and implementing the Evanno method