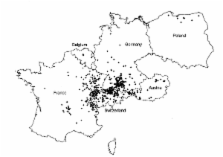 Surveillance for alveolar echinococcosis in central Europe was initiated in 1998. On a voluntary basis, 559 patients were reported to the registry. Most cases originated from rural communities in regions from eastern France to western Austria; single cases were reported far away from the disease-“endemic” zone throughout central Europe. Of 210 patients, 61.4% were involved in vocational or part-time farming, gardening, forestry, or hunting. Patients were diagnosed at a mean age of 52.5 years; 78% had symptoms. Alveolar echinococcosis primarily manifested as a liver disease. Of the 559 patients, 190 (34%) were already affected by spread of the parasitic larval tissue. Of 408 (73%) patients alive in 2000, 4.9% were cured. The increasing prevalence of Echinococcus multilocularis in foxes in rural and urban areas of central Europe and the occurrence of cases outside the alveolar echinococcosis–endemic regions suggest that this disease deserves increased attention.

Judith J. Eckert,  Kaitlyn Ammann (1996)
This article deals with cystic echinococcosis (CE) and alveolar echinococcosis in humans caused by the cestode parasites Echinococcus granulosus and Echinococcus multilocularis. The life cycles of these parasites and their epidemiologic aspects are briefly discussed, and a detailed review is presented on clinical aspects of the diseases, including diagnosis and therapy. Considerable progress has been made in chemotherapy but the results are not yet satisfactory. A new alternative for treatment of CE is puncture of cysts, aspiration of fluid, injection of ethanol, and reaspiration of fluid (PAIR).

Echinococcosis: an emerging or re-emerging zoonosis?

J. Eckert,  F.J. Conraths,  K. Tackmann (2000)
The aim of this review is a critical discussion of factors actually or potentially contributing to persistence or emergence of echinococcosis in humans. Alveolar echinococcosis (AE), a life-threatening infection of humans, is caused by a larval stage of Echinococcus multilocularis. The adult parasite inhabits the intestine of foxes and other carnivores and has a wide distribution in the northern hemisphere (North America and northern and central Eurasia). Recent surveys in central Europe have extended the known geographical occurrence of E. multilocularis in foxes from four countries at the end of the 1980s to at least 11 countries in 1999. Cases of human AE previously regularly reported from only four countries are now recorded from seven countries, but the annual incidences are low. Since adequate information from earlier surveys is not available, it is not possible to conclude if the new findings reflect a recent extension of the parasite's range or just the first identification of hitherto unnoticed endemic areas. Evidence of parasite spreading has been reported from North America and Japan. Factors with the potential of enhancing the infection risk for humans in the future include increasing fox populations and parasite prevalences, progressing invasion of cities by foxes, the establishment of urban cycles of the parasite, and the spill-over of the E. multilocularis infection from wild carnivores to domestic dogs and cats. In view of the potential severity and fatality of AE in humans health authorities should initiate internationally coordinated countermeasures. Although control programmes against human cystic echinococcosis (CE), caused by E. granulosus, have been established in some countries and effective control strategies are available, the parasite has still a wide geographical distribution affecting many countries of all continents. Thus, human CE is persisting in many parts of the world with high incidences, and in some areas it is a re-emerging problem. For example, alarming increases of the number of human cases have been reported from Bulgaria and Kazakhstan, and the People's Republic of China. Progress in control can only be expected if health authorities attribute a higher priority to this disease and if all modern diagnostic and control options (for example vaccination of intermediate host animals) can be used.

Dominique A. Vuitton,  P. I. Craig,  Akira Ito … (2000)
Human alveolar echinococcosis (AE) is usually a rare, highly pathogenic zoonotic disease, transmitted across the northern hemisphere between fox and rodent hosts. In China the first cases were described in 1965; however very few epidemiological studies have been undertaken since. Following identification in 1991 of a serious focus of human AE in south Gansu province, detailed village-based community and ecological studies were carried out between 1994 and 1997. Hepatic ultrasound mass screening with serological testing (five tests) identified 84/2482 new AE cases (3%). An overall prevalence of 4.1% (135/3331) was recorded for the area when previous cases were also included. Based on a seropositive result only, without an ultrasound scan indication, no additional AE cases were identified. Of the evolutive AE cases, 96% were seropositive in at least one test, while up 15-20% of individuals who exhibited hepatic calcified lesions and 12-15% exhibiting hepatic nodular lesions were seropositive for specific Em2 or Em18 antibodies. Village (n=31) human AE prevalence rates varied from 0 to 15.8%. Questionnaire analysis indicated that total number of dogs owned over a period was a risk factor (P 0.6). Rodent ecology studies revealed an association between density indices of voles (Microtus limnophilus) and village AE prevalence rates, on the one hand, and village landscape characterised by a ratio of scrub/grassland to total area above 50% (P<0.005). Long-term transmission of Echinococcus multilocularis and risk of zoonotic infection of south Gansu farmers may be related ultimately to a process of deforestation driven by agriculture. This in turn probably results in creation of optimal peri-domestic habitats for rodents that serve as intermediate host species (such as M. limnophilus) and subsequent development of a peri-domestic cycle involving dogs.