Impact of variation in physical activity after total joint replacement 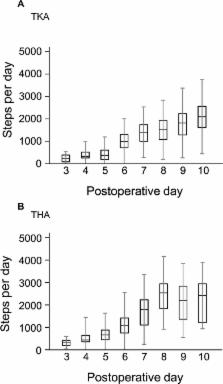 Seventy-two patients were enrolled in the study. Forty patients underwent initial TKA, and 32 initial THA. Physical activity was measured for 8 days from postoperative day 3 to 10. Patients with substantial correlation between physical activity and postoperative day were classified as the “good-pacing” group. Patients with no correlation between them were classified as the “poor-pacing” group. They were also evaluated using a pain visual analog scale (VAS), pain catastrophizing scale, and hospital anxiety and depression scale.

Joy M. Campbell,  Kathleen C M Campbell,  R Edwards … (2009)
Pain catastrophizing is conceptualized as a negative cognitive-affective response to anticipated or actual pain and has been associated with a number of important pain-related outcomes. In the present review, we first focus our efforts on the conceptualization of pain catastrophizing, highlighting its conceptual history and potential problem areas. We then focus our discussion on a number of theoretical mechanisms of action: appraisal theory, attention bias/information processing, communal coping, CNS pain processing mechanisms, psychophysiological pathways and neural pathways. We then offer evidence to suggest that pain catastrophizing represents an important process factor in pain treatment. We conclude by offering what we believe represents an integrated heuristic model for use by researchers over the next 5 years; a model we believe will advance the field most expediently.

Scott Crouter,  Bernard Schneider,  Jennifer D. Bassett … (2003)
This study examined the effects of walking speed on the accuracy and reliability of 10 pedometers: Yamasa Skeletone (SK), Sportline 330 (SL330) and 345 (SL345), Omron (OM), Yamax Digiwalker SW-701 (DW), Kenz Lifecorder (KZ), New Lifestyles 2000 (NL), Oregon Scientific (OR), Freestyle Pacer Pro (FR), and Walk4Life LS 2525 (WL). Ten subjects (33 +/- 12 yr) walked on a treadmill at various speeds (54, 67, 80, 94, and 107 m x min-1) for 5-min stages. Simultaneously, an investigator determined steps by a hand counter and energy expenditure (kcal) by indirect calorimetry. Each brand was measured on the right and left sides. Correlation coefficients between right and left sides exceeded 0.81 for all pedometers except OR (0.76) and SL345 (0.57). Most pedometers underestimated steps at 54 m x min-1, but accuracy for step counting improved at faster speeds. At 80 m x min-1 and above, six models (SK, OM, DW, KZ, NL, and WL) gave mean values that were within +/- 1% of actual steps. Six pedometers displayed the distance traveled. Most of them estimated mean distance to within +/- 10% at 80 m x min-1 but overestimated distance at slower speeds and underestimated distance at faster speeds. Eight pedometers displayed kilocalories, but except for KZ and NL, it is unclear whether this should reflect net or gross kilocalories. If one assumes they display net kilocalories, the general trend was an overestimation of kilocalories at every speed. If one assumes they display gross kilocalorie, then seven of the eight pedometers were accurate to within +/-30% at all speeds. In general, pedometers are most accurate for assessing steps, less accurate for assessing distance, and even less accurate for assessing kilocalories.

Accuracy and reliability of 10 pedometers for measuring steps over a 400-m walk.

Bernard Schneider,  Olivera Lukajic,  Jennifer D. Bassett … (2003)
The purpose of this study was to determine the accuracy and reliability of the following electronic pedometers for measuring steps: Freestyle Pacer Pro (FR), Kenz Lifecorder (KZ), New Lifestyles NL-2000 (NL), Omron HJ-105 (OM), Oregon Scientific PE316CA (OR), Sportline 330 (SL330) and 345 (SL345), Walk4Life LS 2525 (WL), Yamax Skeletone EM-180 (SK), and the Yamax Digi-Walker SW-701 (DW). Ten males (34.7 +/- 12.6 yr) (mean +/- SD) and 10 females (43.1 +/- 19.9 yr) ranging in BMI from 19.8 to 33.6 kg.m-2 walked 400-m around an outdoor track while wearing two pedometers of the same model (one on the right and left sides of the body) for each of 10 models. Four pedometers of each model were assessed in this fashion. The actual steps taken were tallied by a researcher. The KZ, NL, and DW were the most accurate in counting steps, displaying values that were within +/-3% of the actual steps taken, 95% of the time. The SL330 and OM were the least accurate, displaying values that were within +/-37% of the actual steps, 95% of the time. The reliability within a single model (Cronbach's alpha) was >0.80 for all pedometers with the exception of the SL330. The intramodel reliability was exceptionally high (>0.99) in the KZ, OM, NL, and the DW. Due to the variation that exists among models in regard to the internal mechanism and sensitivity, not all pedometers count steps accurately. Thus, it is important for researchers who use pedometers to assess physical activity to be aware of their accuracy and reliability.