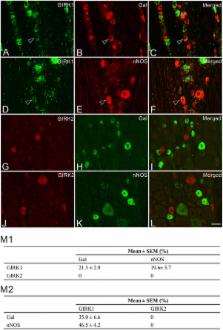 Increased nociceptive neuronal excitability underlies chronic pain conditions. Various ion channels, including sodium, calcium and potassium channels have pivotal roles in the control of neuronal excitability. The members of the family of G protein-gated inwardly rectifying potassium (GIRK) channels, GIRK1–4, have been implicated in modulating excitability. Here, we investigated the expression and distribution of GIRK1 and GIRK2 in normal and injured dorsal root ganglia (DRGs) and spinal cord of rats.

We found that ~70% of the DRG neurons expressed GIRK1, while only <10% expressed GIRK2. The neurochemical profiles of GIRK1- and GIRK2-immunoreactive neurons were characterized using the neuronal markers calcitonin gene-related peptide, isolectin-B4 and neurofilament-200, and the calcium-binding proteins calbindin D28k, calretinin, parvalbumin and secretagogin. Both GIRK subunits were expressed in DRG neurons with nociceptive characteristics. However, while GIRK1 was widely expressed in several sensory neuronal subtypes, GIRK2 was detected mainly in a group of small C-fiber neurons. In the spinal dorsal horn, GIRK1- and -2-positive cell bodies and processes were mainly observed in lamina II, but also in superficial and deeper layers. Abundant GIRK1-, but not GIRK2-like immunoreactivity, was found in the ventral horn (laminae VI–X). Fourteen days after axotomy, GIRK1 and GIRK2 were down-regulated in DRG neurons at the mRNA and protein levels. Both after axotomy and rhizotomy there was a reduction of GIRK1- and -2-positive processes in the dorsal horn, suggesting a presynaptic localization of these potassium channels. Furthermore, nerve ligation caused accumulation of both subunits on both sides of the lesion, providing evidence for anterograde and retrograde fast axonal transport.

Our data support the hypothesis that reduced GIRK function is associated with increased neuronal excitability and causes sensory disturbances in post-injury conditions, including neuropathic pain.

Christian Lüscher,  Paul A. Slesinger (2010)
G protein-gated inwardly rectifying potassium (GIRK) channels hyperpolarize neurons in response to activation of many different G protein-coupled receptors and thus control the excitability of neurons through GIRK-mediated self-inhibition, slow synaptic potentials and volume transmission. GIRK channel function and trafficking are highly dependent on the channel subunit composition. Pharmacological investigations of GIRK channels and studies in animal models suggest that GIRK activity has an important role in physiological responses, including pain perception and memory modulation. Moreover, abnormal GIRK function has been implicated in altering neuronal excitability and cell death, which may be important in the pathophysiology of diseases such as epilepsy, Down's syndrome, Parkinson's disease and drug addiction. GIRK channels may therefore prove to be a valuable new therapeutic target.

Gerald Zamponi,  Stephen G. Waxman (2014)
The transmission and processing of pain signals relies critically on the activities of ion channels that are expressed in afferent pain fibers. This includes voltage-gated channels, as well as background (or leak) channels that collectively regulate resting membrane potential and action potential firing properties. Dysregulated ion channel expression in response to nerve injury and inflammation results in enhanced neuronal excitability that underlies chronic neuropathic and inflammatory pain. Pharmacological modulators of ion channels, particularly those that target channels on peripheral neurons, are being pursued as possible analgesics. Over the past few years, a number of different types of ion channels have been implicated in afferent pain signaling. Here we give an overview of recent advances on sodium, calcium, potassium and chloride channels that are emerging as especially attractive targets for the treatment of pain.

Nitric oxide (NO) and nociceptive processing in the spinal cord.

S. Meller,  G F Gebhart (1993)
There is considerable evidence to implicate N-methyl-D-aspartate (NMDA) receptor activation in the mechanisms that underly thermal hyperalgesia in the spinal cord. As many of the effects of NMDA receptor activation appear to be ultimately mediated through production of nitric oxide (NO), recent reports have begun to define the role of NO in spinal nociceptive processing. From this evidence, it is likely that NO, produced in neurons in the spinal cord that contain NO synthase, like NMDA, plays a pivotal role in multisynaptic local circuit nociceptive processing in the spinal cord. Collectively, these reports suggest that the reflex withdrawal response to noxious heat is not mediated through activation of NMDA receptors and subsequent production of NO and cGMP, but that the acute NMDA-produced facilitation of thermal reflexes is NMDA-, NO- and cGMP-mediated and that a sustained production of NO and subsequent activation of soluble guanylate cyclase (GC-S) in the lumbar spinal cord appears to be required for maintenance of the thermal hyperalgesia produced in persistent pain models. As our knowledge and understanding of the new and intriguing class of neurotransmitters typified by NO emerges, it is likely that the next few years of pain and analgesia research will focus on the cellular events underlying mechanisms of chronic pain.