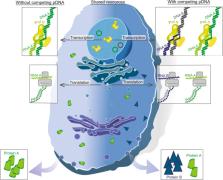 Transient transfections are routinely used in basic and synthetic biology studies to unravel pathway regulation and to probe and characterise circuit designs. As each experiment has a component of intrinsic variability, reporter gene expression is usually normalized with co-delivered genes that act as transfection controls. Recent reports in mammalian cells highlight how resource competition for gene expression leads to biases in data interpretation, with a direct impact on co-transfection experiments. Here we define the connection between resource competition and transient transfection experiments and discuss possible alternatives. Our aim is to raise awareness within the community and stimulate discussion to include such considerations in future experimental designs, for the development of better transfection controls.

Mammalian cell transfection: the present and the future

Tae-Kyung Kim,  James Eberwine (2010)
Transfection is a powerful analytical tool enabling study of the function of genes and gene products in cells. The transfection methods are broadly classified into three groups; biological, chemical, and physical. These methods have advanced to make it possible to deliver nucleic acids to specific subcellular regions of cells by use of a precisely controlled laser-microcope system. The combination of point-directed transfection and mRNA transfection is a new way of studying the function of genes and gene products. However, each method has its own advantages and disadvantages so the optimum method depends on experimental design and objective.

Philippe Marguet,  Lingchong You,  Cheemeng Tan (2009)
Synthetic gene circuits are often engineered by considering the host cell as an invariable 'chassis'. Circuit activation, however, may modulate host physiology, which in turn can substantially impact circuit behavior. We illustrate this point by a simple circuit consisting of mutant T7 RNA polymerase (T7 RNAP*) that activates its own expression in the bacterium Escherichia coli. Although activation by the T7 RNAP* is noncooperative, the circuit caused bistable gene expression. This counterintuitive observation can be explained by growth retardation caused by circuit activation, which resulted in nonlinear dilution of T7 RNAP* in individual bacteria. Predictions made by models accounting for such effects were verified by further experimental measurements. Our results reveal a new mechanism of generating bistability and underscore the need to account for host physiology modulation when engineering gene circuits.