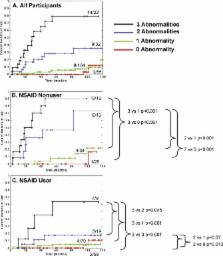 Somatic genetic CDKN2A, TP53, and DNA content abnormalities are common in many human cancers and their precursors, including esophageal adenocarcinoma (EA) and Barrett's esophagus (BE), conditions for which aspirin and other nonsteroidal anti-inflammatory drugs (NSAIDs) have been proposed as possible chemopreventive agents; however, little is known about the ability of a biomarker panel to predict progression to cancer nor how NSAID use may modulate progression. We aimed to evaluate somatic genetic abnormalities with NSAIDs as predictors of EA in a prospective cohort study of patients with BE.

Esophageal biopsies from 243 patients with BE were evaluated at baseline for TP53 and CDKN2A (p16) alterations, tetraploidy, and aneuploidy using sequencing; loss of heterozygosity (LOH); methylation-specific PCR; and flow cytometry. At 10 y, all abnormalities, except CDKN2A mutation and methylation, contributed to EA risk significantly by univariate analysis, ranging from 17p LOH (relative risk [RR] = 10.6; 95% confidence interval [CI] 5.2–21.3, p < 0.001) to 9p LOH (RR = 2.6; 95% CI 1.1–6.0, p = 0.03). A panel of abnormalities including 17p LOH, DNA content tetraploidy and aneuploidy, and 9p LOH was the best predictor of EA (RR = 38.7; 95% CI 10.8–138.5, p < 0.001). Patients with no baseline abnormality had a 12% 10-y cumulative EA incidence, whereas patients with 17p LOH, DNA content abnormalities, and 9p LOH had at least a 79.1% 10-y EA incidence. In patients with zero, one, two, or three baseline panel abnormalities, there was a significant trend toward EA risk reduction among NSAID users compared to nonusers ( p = 0.01). The strongest protective effect was seen in participants with multiple genetic abnormalities, with NSAID nonusers having an observed 10-y EA risk of 79%, compared to 30% for NSAID users ( p < 0.001).

In a ten-year study of people with Barrett's esophagus, nonsteroidal anti-inflamatory drugs were associated with reduced risk of esophageal adenocarcinoma, especially in patients with multiple high-risk molecular abnormalities.

Normally, the cells in the human body divide only when extra cells are needed, after an injury, for example. Sometimes, however, cells accumulate genetic changes (mutations) that allow them to divide uncontrollably to form a disorganized mass or tumor. If these altered cells also acquire mutations that allow them to spread around the body, a malignant tumor or cancer results. Scientists have identified numerous genetic changes that occur in tumors and are now investigating whether these molecular abnormalities can be used as “biomarkers” to choose the best treatments for patients, to identify who will benefit from cancer-prevention strategies, to detect cancer early, and to predict which cancers are most likely to become life-threatening. This last application is particularly important for cancers with a well-defined premalignant stage. Because the cells in premalignant tissues have acquired some of the genetic changes required for cancer development, they are more likely to become malignant than normal cells. Barrett's esophagus, for example, is a premalignant disorder of the muscular tube that takes food from the mouth to the stomach. People with Barrett's esophagus are much more likely to develop esophageal cancer than the general population.

Esophageal cancer is often incurable by the time it is detected, so it would be helpful to know which people with Barrett's esophagus are most likely to develop esophageal cancer—only 1 in 200 of them develop cancer each year. In this study, the researchers evaluated whether a panel of genetic alterations could identify this subset of patients. They also investigated whether the regular use of aspirin or other nonsteroidal anti-inflammatory drugs (NSAIDs) affects the risk of developing esophageal cancer in people with Barrett's esophagus—other evidence suggests that NSAIDs may help to prevent several types of cancer, including esophageal cancer.

The researchers took esophageal tissue samples from patients with Barrett's esophagus and looked for alterations in the genes encoding the tumor-suppressor proteins TP53 and CDKN2A. These proteins normally stop cells dividing but are often inactivated in cancer cells by mutation of one of the two gene copies that encode each of them and also loss of the other copy (so-called “loss of heterozygosity” or LOH). The researchers also looked for changes in the cellular DNA content of the samples (tumor cells often contain unusual amounts of DNA) and asked the study participants about their NSAID use before waiting to see which participants developed esophageal cancer. After 10 y, the participants whose tissue samples had LOH of the short arms (p) of Chromosome 17 or 9 (the sites of the genes encoding TP53 and CDKN2A, respectively), or an altered DNA content, were more likely to have developed esophageal cancer than those without these abnormalities; those whose samples contained all three abnormalities had the highest risk of developing esophageal cancer. Overall, just 12% of patients with no abnormalities but nearly 80% of patients with three abnormalities developed esophageal cancer. NSAID use reduced the risk of cancer development in all the participants, but its effect was greatest in those with three genetic abnormalities.

A genetic model for colorectal tumorigenesis.

Breast and ovarian cancer risks due to inherited mutations in BRCA1 and BRCA2.

Mary-Claire King,  Ira B Mandell,  J. Marks … (2003)
Risks of breast and ovarian cancer were determined for Ashkenazi Jewish women with inherited mutations in the tumor suppressor genes BRCA1 and BRCA2. We selected 1008 index cases, regardless of family history of cancer, and carried out molecular analysis across entire families. The lifetime risk of breast cancer among female mutation carriers was 82%, similar to risks in families with many cases. Risks appear to be increasing with time: Breast cancer risk by age 50 among mutation carriers born before 1940 was 24%, but among those born after 1940 it was 67%. Lifetime risks of ovarian cancer were 54% for BRCA1 and 23% for BRCA2 mutation carriers. Physical exercise and lack of obesity in adolescence were associated with significantly delayed breast cancer onset.

The effect of celecoxib, a cyclooxygenase-2 inhibitor, in familial adenomatous polyposis.

* To whom correspondence should be addressed. E-mail: pgal@ 123456fhcrc.org