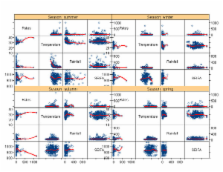 The results of this study suggest that spatiotemporal CART models based on social economic and weather variables can be used for predicting the outbreak of cryptosporidiosis in Queensland, Australia.

A. DeMaria,  Jyotsna S. Jagai,  E S Naumova … (2007)
We propose an analytical and conceptual framework for a systematic and comprehensive assessment of disease seasonality to detect changes and to quantify and compare temporal patterns. To demonstrate the proposed technique, we examined seasonal patterns of six enterically transmitted reportable diseases (EDs) in Massachusetts collected over a 10-year period (1992-2001). We quantified the timing and intensity of seasonal peaks of ED incidence and examined the synchronization in timing of these peaks with respect to ambient temperature. All EDs, except hepatitis A, exhibited well-defined seasonal patterns which clustered into two groups. The peak in daily incidence of Campylobacter and Salmonella closely followed the peak in ambient temperature with the lag of 2-14 days. Cryptosporidium, Shigella, and Giardia exhibited significant delays relative to the peak in temperature (approximately 40 days, P<0.02). The proposed approach provides a detailed quantification of seasonality that enabled us to detect significant differences in the seasonal peaks of enteric infections which would have been lost in an analysis using monthly or weekly cumulative information. This highly relevant to disease surveillance approach can be used to generate and test hypotheses related to disease seasonality and potential routes of transmission with respect to environmental factors.

Zero-inflated models for regression analysis of count data: a study of growth and development.

Albert Cheung (2002)
Poisson regression is widely used in medical studies, and can be extended to negative binomial regression to allow for heterogeneity. When there is an excess number of zero counts, a useful approach is to used a mixture model with a proportion P of subjects not at risk, and a proportion of 1--P at-risk subjects who take on outcome values following a Poisson or negative binomial distribution. Covariate effects can be incorporated into both components of the models. In child assessment, fine motor development is often measured by test items that involve a process of imitation and a process of fine motor exercise. One such developmental milestone is 'building a tower of cubes'. This study analyses the impact of foetal growth and postnatal somatic growth on this milestone, operationalized as the number of cubes and measured around the age of 22 months. It is shown that the two aspects of early growth may have different implications for imitation and fine motor dexterity. The usual approach of recording and analysing the milestone as a binary outcome, such as whether the child can build a tower of three cubes, may leave out important information.