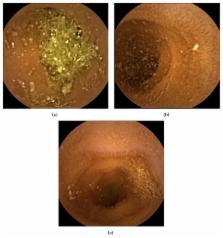 F Foschia,  A Vecchioli Scaldazza,  Maria Riccioni … (2002)
This study was undertaken to prospectively compare the clinical outcomes of small bowel radiographs with the wireless capsule endoscopy. Twenty-two patients were selected consecutively because of suspected small bowel disease. Two patients were excluded owing to ileal stenosis. Thus, the results of barium follow-through and the Given M2A wireless video capsule (Given Imaging Ltd., Yoqneam, Israel) endoscopy were compared in 20 patients (13 men; mean age, 52.5 yr; range, 29-78 yr). Barium follow-through was normal in 17 patients and showed ileal nodularity in 3 patients. Capsule endoscopy was normal in 3 patients and showed positive findings in the remaining 17 patients. The barium study was considered diagnostic in 4 (20%) patients. The capsule endoscopy was considered diagnostic in 9 (45%) patients, suspicious in 8 (40%) patients, and failed in 3 (15%) patients. For obscure gastrointestinal (GI) bleeding, the diagnostic potential of barium follow-through was much worse as compared with the capsule endoscopy (5% vs. 31%, P < 0.05). Capsule endoscopy was well tolerated and better accepted by patients when compared with the most recently performed endoscopic procedure. The video capsule endoscope was found to be superior to small bowel radiograph for evaluation of small bowel diseases. However, this novel wireless endoscope system needs further assessment because of limitations such as difficulties in interpretation of potentially nonspecific findings.

Capsule endoscopy in the evaluation of patients with suspected small intestinal bleeding: Results of a pilot study.

P Tewari,  A. Sherry,  Klara H. Malinowska … (2004)
The purpose of this study was to determine the mechanism of action of SPI-0211 (lubiprostone), a novel bicyclic fatty acid in development for the treatment of bowel dysfunction. Adult rabbit intestine was shown to contain mRNA for ClC-2 using RT-PCR, Northern blot analysis, and in situ hybridization. T84 cells grown to confluence on permeable supports were shown to express ClC-2 channel protein in the apical membrane. SPI-0211 increased electrogenic Cl- transport across the apical membrane of T84 cells, with an EC50 of approximately 18 nM measured by short-circuit current (Isc) after permeabilization of the basolateral membrane with nystatin. SPI-0211 effects on Cl- currents were also measured by whole cell patch clamp using the human embryonic kidney (HEK)-293 cell line stably transfected with either recombinant human ClC-2 or recombinant human cystic fibrosis transmembrane regulator (CFTR). In these studies, SPI-0211 activated ClC-2 Cl- currents in a concentration-dependent manner, with an EC50 of approximately 17 nM, and had no effect in nontransfected HEK-293 cells. In contrast, SPI-0211 had no effect on CFTR Cl- channel currents measured in CFTR-transfected HEK-293 cells. Activation of ClC-2 by SPI-0211 was independent of PKA. Together, these studies demonstrate that SPI-0211 is a potent activator of ClC-2 Cl- channels and suggest a physiologically relevant role for ClC-2 Cl- channels in intestinal Cl- transport after SPI-0211 administration.