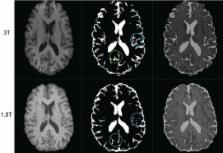 Whole brain atrophy is a putative outcome measure in monitoring relapsing‐remitting multiple sclerosis (RRMS). With the ongoing MRI transformation from 1.5T to 3T, there is an unmet need to calibrate this change. We evaluated brain parenchymal volumes (BPVs) from 1.5T versus 3T in MS and normal controls (NC).

Field strength may impact whole brain volume measurements in patients with MS though the differences are not too divergent between 1.5T and 3T.

Advances in functional and structural MR image analysis and implementation as FSL.

Simon Smith,  H Stefano,  Christian F. Beckmann … (2004)
The techniques available for the interrogation and analysis of neuroimaging data have a large influence in determining the flexibility, sensitivity, and scope of neuroimaging experiments. The development of such methodologies has allowed investigators to address scientific questions that could not previously be answered and, as such, has become an important research area in its own right. In this paper, we present a review of the research carried out by the Analysis Group at the Oxford Centre for Functional MRI of the Brain (FMRIB). This research has focussed on the development of new methodologies for the analysis of both structural and functional magnetic resonance imaging data. The majority of the research laid out in this paper has been implemented as freely available software tools within FMRIB's Software Library (FSL).

Teri S Krebs (2002)
An automated method for segmenting magnetic resonance head images into brain and non-brain has been developed. It is very robust and accurate and has been tested on thousands of data sets from a wide variety of scanners and taken with a wide variety of MR sequences. The method, Brain Extraction Tool (BET), uses a deformable model that evolves to fit the brain's surface by the application of a set of locally adaptive model forces. The method is very fast and requires no preregistration or other pre-processing before being applied. We describe the new method and give examples of results and the results of extensive quantitative testing against "gold-standard" hand segmentations, and two other popular automated methods. Copyright 2002 Wiley-Liss, Inc.