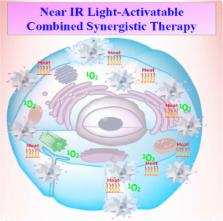 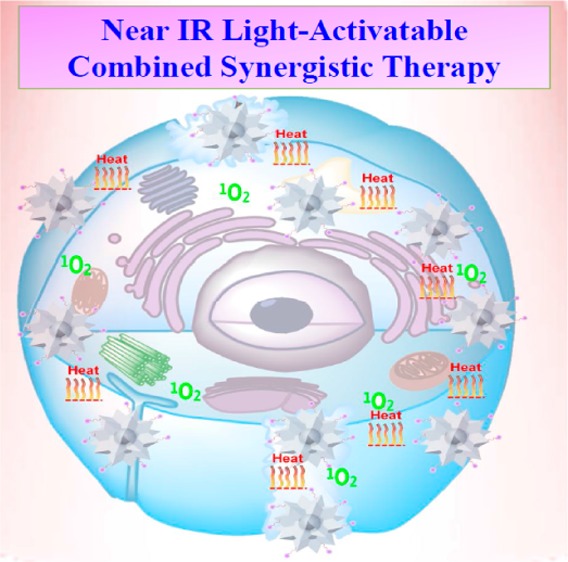 For several decades, cancer has been one of the most life-threatening diseases. For enhancing anticancer efficiency with minimum side effects, combination therapy is envisioned. The current manuscript reports for the first time the development of a methylene blue (MB) bound nanoplatform, which is capable of delivering targeted diagnostic and combined synergistic photothermal and photodynamic treatment of cancer. Experimental data found that, once the nanoparticle binds with the target cell surface, it can detect LNCaP human prostate cancer cell selectively using fluorescence imaging. Our result shows that the therapeutic actions can be controlled with external NIR light. No cytotoxicity was observed in the absence of NIR light. Targeted photodynamic and photothermal treatment using 785 nm NIR light indicates that the multimodal treatment enhances the possibility of destroying LNCaP prostate cancer cells in vitro dramatically. We discuss the operating principle for the targeted imaging and possible mechanisms for combined therapeutic actions. Our experimental data show that NIR light activated combined therapy for cancer may become a highly effective treatment procedure in clinical settings.

Nanocarriers as an emerging platform for cancer therapy.

Robert D. Langer,  Heini Karp,  Seungpyo Hong … (2008)
Nanotechnology has the potential to revolutionize cancer diagnosis and therapy. Advances in protein engineering and materials science have contributed to novel nanoscale targeting approaches that may bring new hope to cancer patients. Several therapeutic nanocarriers have been approved for clinical use. However, to date, there are only a few clinically approved nanocarriers that incorporate molecules to selectively bind and target cancer cells. This review examines some of the approved formulations and discusses the challenges in translating basic research to the clinic. We detail the arsenal of nanocarriers and molecules available for selective tumour targeting, and emphasize the challenges in cancer treatment.

Xiaohua Huang,  Douaa Sayed,  Suhail Sayed … (2006)
Due to strong electric fields at the surface, the absorption and scattering of electromagnetic radiation by noble metal nanoparticles are strongly enhanced. These unique properties provide the potential of designing novel optically active reagents for simultaneous molecular imaging and photothermal cancer therapy. It is desirable to use agents that are active in the near-infrared (NIR) region of the radiation spectrum to minimize the light extinction by intrinsic chromophores in native tissue. Gold nanorods with suitable aspect ratios (length divided by width) can absorb and scatter strongly in the NIR region (650-900 nm). In the present work, we provide an in vitro demonstration of gold nanorods as novel contrast agents for both molecular imaging and photothermal cancer therapy. Nanorods are synthesized and conjugated to anti-epidermal growth factor receptor (anti-EGFR) monoclonal antibodies and incubated in cell cultures with a nonmalignant epithelial cell line (HaCat) and two malignant oral epithelial cell lines (HOC 313 clone 8 and HSC 3). The anti-EGFR antibody-conjugated nanorods bind specifically to the surface of the malignant-type cells with a much higher affinity due to the overexpressed EGFR on the cytoplasmic membrane of the malignant cells. As a result of the strongly scattered red light from gold nanorods in dark field, observed using a laboratory microscope, the malignant cells are clearly visualized and diagnosed from the nonmalignant cells. It is found that, after exposure to continuous red laser at 800 nm, malignant cells require about half the laser energy to be photothermally destroyed than the nonmalignant cells. Thus, both efficient cancer cell diagnostics and selective photothermal therapy are realized at the same time.

W Cai,  J Schuller,  S. Barnard … (2010)
The unprecedented ability of nanometallic (that is, plasmonic) structures to concentrate light into deep-subwavelength volumes has propelled their use in a vast array of nanophotonics technologies and research endeavours. Plasmonic light concentrators can elegantly interface diffraction-limited dielectric optical components with nanophotonic structures. Passive and active plasmonic devices provide new pathways to generate, guide, modulate and detect light with structures that are similar in size to state-of-the-art electronic devices. With the ability to produce highly confined optical fields, the conventional rules for light-matter interactions need to be re-examined, and researchers are venturing into new regimes of optical physics. In this review we will discuss the basic concepts behind plasmonics-enabled light concentration and manipulation, make an attempt to capture the wide range of activities and excitement in this area, and speculate on possible future directions.