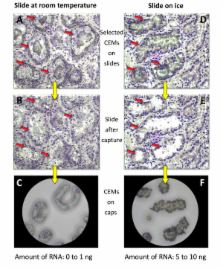 Laser-capture microdissection (LCM) that enables the isolation of specific cell populations from complex tissues under morphological control is increasingly used for subsequent gene expression studies in cell biology by methods such as real-time quantitative PCR (qPCR), microarrays and most recently by RNA-sequencing. Challenges are i) to select precisely and efficiently cells of interest and ii) to maintain RNA integrity. The mammary gland which is a complex and heterogeneous tissue, consists of multiple cell types, changing in relative proportion during its development and thus hampering gene expression profiling comparison on whole tissue between physiological stages. During lactation, mammary epithelial cells (MEC) are predominant. However several other cell types, including myoepithelial (MMC) and immune cells are present, making it difficult to precisely determine the specificity of gene expression to the cell type of origin. In this work, an optimized reliable procedure for producing RNA from alveolar epithelial cells isolated from frozen histological sections of lactating goat, sheep and cow mammary glands using an infrared-laser based Arcturus Veritas LCM (Applied Biosystems ®) system has been developed. The following steps of the microdissection workflow: cryosectioning, staining, dehydration and harvesting of microdissected cells have been carefully considered and designed to ensure cell capture efficiency without compromising RNA integrity.

The best results were obtained when staining 8 μm-thick sections with Cresyl violet ® (Ambion, Applied Biosystems ®) and capturing microdissected cells during less than 2 hours before RNA extraction. In addition, particular attention was paid to animal preparation before biopsies or slaughtering (milking) and freezing of tissue blocks which were embedded in a cryoprotective compound before being immersed in isopentane. The amount of RNA thus obtained from ca.150 to 250 acini (300,000 to 600,000 μm 2) ranges between 5 to 10 ng. RNA integrity number (RIN) was ca. 8.0 and selectivity of this LCM protocol was demonstrated through qPCR analyses for several alveolar cell specific genes, including LALBA (α-lactalbumin) and CSN1S2 (α s2-casein), as well as Krt14 (cytokeratin 14), CD3e and CD68 which are specific markers of MMC, lymphocytes and macrophages, respectively.

RNAs isolated from MEC in this manner were of very good quality for subsequent linear amplification, thus making it possible to establish a referential gene expression profile of the healthy MEC, a useful platform for tumor biomarker discovery.

Malenka M Bissell,  J Aggeler,  T. Ram … (1989)
An essential feature of mammary gland differentiation during pregnancy is the formation of alveoli composed of polarized epithelial cells, which, under the influence of lactogenic hormones, secrete vectorially and sequester milk proteins. Previous culture studies have described either organization of cells polarized towards lumina containing little or no demonstrable tissue-specific protein, or establishment of functional secretory cells exhibiting little or no glandular architecture. In this paper, we report that tissue-specific vectorial secretion coincides with the formation of functional alveoli-like structures by primary mammary epithelial cells cultured on a reconstituted basement membrane matrix (derived from Engelbreth-Holm-Swarm murine tumour). Morphogenesis of these unique three-dimensional structures was initiated by cell-directed remodelling of the exogenous matrix leading to reorganization of cells into matrix-ensheathed aggregates by 24 h after plating. The aggregates subsequently cavitated, so that by day 6 the cells were organized into hollow spheres in which apical cell surfaces faced lumina sealed by tight junctions and basal surfaces were surrounded by a distinct basal lamina. The profiles of proteins secreted into the apical (luminal) and basal (medium) compartments indicated that these alveoli-like structures were capable of an appreciable amount of vectorial secretion. Immunoprecipitation with a broad spectrum milk antiserum showed that more than 80% of caseins were secreted into the lumina, whereas iron-binding proteins (both lactoferrin and transferrin) were present in comparable amounts in each compartment. Thus, these mammary cells established protein targeting pathways directing milk-specific proteins to the luminal compartment. A time course monitoring secretory activity demonstrated that establishment of tissue-specific vectorial secretion and increased total and milk protein secretion coincided with functional alveolar-like multicellular architecture. This culture system is unique among models of epithelial cell polarity in that it demonstrates several aspects of epithelial cell polarization: vectorial secretion, apical junctions, a sequestered compartment and formation of a basal lamina. These lumina-containing structures therefore reproduce the dual role of mammary epithelia to secrete vectorially and to sequester milk proteins. Thus, in addition to maintaining tissue-specific cytodifferentiation and function, a basement membrane promotes the expression of tissue-like morphogenesis.

Key stages in mammary gland development. Secretory activation in the mammary gland: it's not just about milk protein synthesis!

Steven M Anderson,  Michael Rudolph,  James L. McManaman … (2007)
The transition from pregnancy to lactation is a critical event in the survival of the newborn since all the nutrient requirements of the infant are provided by milk. While milk contains numerous components, including proteins, that aid in maintaining the health of the infant, lactose and milk fat represent the critical energy providing elements of milk. Much of the research to date on mammary epithelial differentiation has focused upon expression of milk protein genes, providing a somewhat distorted view of alveolar differentiation and secretory activation. While expression of milk protein genes increases during pregnancy and at secretory activation, the genes whose expression is more tightly regulated at this transition are those that regulate lipid biosynthesis. The sterol regulatory element binding protein (SREBP) family of transcription factors is recognized as regulating fatty acid and cholesterol biosynthesis. We propose that SREBP1 is a critical regulator of secretory activation with regard to lipid biosynthesis, in a manner that responds to diet, and that the serine/threonine protein kinase Akt influences this process, resulting in a highly efficient lipid synthetic organ that is able to support the nutritional needs of the newborn.