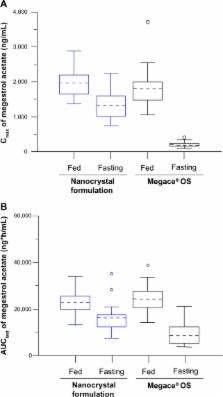 Megestrol acetate is an effective treatment for improving appetite and increasing body weight in patients with cancer-associated anorexia. However, Megace ® oral suspension (OS), a micronized formulation of megestrol acetate, has low bioavailability in the fasting state. To overcome this limitation, a nanocrystal formulation has been developed. This study was performed to evaluate the pharmacokinetics and tolerability of the nanocrystal formulation and to compare them with those of Megace ® OS in the fed and fasting states.

A randomized, open-label, two-treatment, two-period, two-sequence, crossover study was performed in three parts in 93 healthy subjects. A single 625 mg/5 mL oral dose of a nanocrystal formulation was administered in the fasting and fed states (part I). In parts II and III, a single 625 mg/5 mL oral dose of the nanocrystal formulation or Megace ® OS 800 mg/20 mL was given in the fed and fasting states, respectively. Blood samples were collected for up to 120 hours post dose for pharmacokinetic analysis. Tolerability was evaluated throughout the entire study period.

Nanonization of megestrol acetate by laser fragmentation in aqueous milieu.

Grégoire Leclair,  Jean-Christophe Leroux,  Michel Meunier … (2011)
Nanonization is a simple and effective method to improve dissolution rate and oral bioavailability of drugs with poor water solubility. There is growing interest to downscale the nanocrystal production to enable early preclinical evaluation of new drug candidates when compound availability is scarce. The purpose of the present study was to investigate laser fragmentation to form nanosuspensions in aqueous solution of the insoluble model drug megestrol acetate (MA) using very little quantities of the drug. Laser fragmentation was obtained by focusing a femtosecond (fs) or nanosecond (ns) laser radiation on a magnetically stirred MA suspension in water or aqueous solution of a stabilizing agent. The size distribution and physicochemical properties of the drug nanoparticles were characterized, and the in vitro dissolution and in vivo oral pharmacokinetics of a laser fragmented formulation were evaluated. A MA nanosuspension was also prepared by media milling for comparison purpose. For both laser radiations, smaller particles were obtained as the laser power was increased, but at a cost of higher degradation. Significant nanonization was achieved after a 30-minfs laser treatment at 250mW and a 1-hns laser treatment at 2500mW. The degradation induced by the laser process of the drug was primarily oxidative in nature. The crystal phase of the drug was maintained, although partial loss of crystallinity was observed. The in vitro dissolution rate and in vivo bioavailability of the laser fragmented formulation were similar to those obtained with the nanosuspension prepared by media milling, and significantly improved compared to the coarse drug powder. It follows that this laser nanonization method has potential to be used for the preclinical evaluation of new drug candidates.

Megestrol acetate in cachexia and anorexia

Shing-shing Yeh,  Michael Schuster (2006)
The aim is to review major clinical trials that have used megestrol acetate (MA) in the treatment of cachexia across several disease states. A review of general usage and potential side-effects are discussed. A theory that the newly approved nanocrystal formation of MA can better deliver this potent medication for treatment will also be reviewed.

The science of megestrol acetate delivery: potential to improve outcomes in cachexia.

F R Femia,  Richert E Goyette (2004)
Cachexia, usually defined as the loss of >5% of an individual's baseline bodyweight over 2-6 months, occurs with a number of diseases that includes not only AIDS and advanced cancer but also chronic heart failure, rheumatoid arthritis, chronic obstructive pulmonary disease, Crohn disease, and renal failure. Anorexia is considered a key component of the anorexia-cachexia syndrome. Progestogens, particularly megestrol acetate, are commonly used to treat anorexia-cachexia. The mechanism of action of megestrol is believed to involve stimulation of appetite by both direct and indirect pathways and antagonism of the metabolic effects of the principal catabolic cytokines. Because the bioavailability of megestrol acetate directly affects its efficacy and safety, the formulation was refined to enhance its pharmacokinetics. Such efforts yielded megestrol acetate in a tablet form, followed by a concentrated oral suspension form, and an oral suspension form developed using nanocrystal technology. Nanocrystal technology was designed specifically to optimize drug delivery and enhance the bioavailability of drugs that have poor solubility in water. Megestrol acetate nanocrystal oral suspension is currently under review by the US FDA for the treatment of cachexia in patients with AIDS. Preclinical pharmacokinetic data suggest that the new megestrol acetate formulation has the potential to significantly shorten the time to clinical response and thus may improve outcomes in patients with anorexia-cachexia.