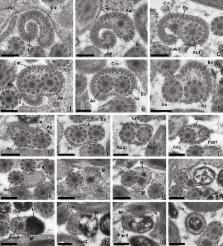 We describe here the mature spermatozoa of three species of bucephalids, namely Bucephalus margaritae, Rhipidocotyle khalili and Prosorhynchus longisaccatus. This study provides the first ultrastructural data on the genera Bucephalus and Rhipidocotyle and enabled us to confirm the model of the mature spermatozoon in the Bucephalinae. The spermatozoon exhibits two axonemes with the 9 + “1” pattern of the Trepaxonemata, one of which is very short, lateral expansion, external ornamentation of the plasma membrane located in the anterior extremity of the spermatozoon and associated with cortical microtubules, spine-like bodies, a mitochondrion, and a nucleus. The maximum number of cortical microtubules is located in the anterior part of the spermatozoon. However, more studies are needed to elucidate if spine-like bodies are present in all the Bucephalinae or not. In the Prosorhynchinae, the mature spermatozoon exhibits a similar ultrastructural pattern. Some differences are observed, particularly the axoneme lengths and the arrangement of the spine-like bodies. The posterior extremity of the spermatozoon in the Bucephalinae exhibits only the nucleus, but prosorhynchines have microtubules.